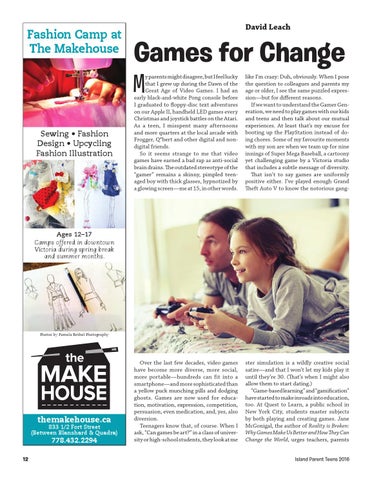 Fashion Camp at The Makehouse

y parents might disagree, but I feel lucky that I grew up during the Dawn of the Great Age of Video Games. I had an early black-and-white Pong console before I graduated to floppy-disc text adventures on our Apple II, handheld LED games every Christmas and joystick battles on the Atari. As a teen, I misspent many afternoons and more quarters at the local arcade with Frogger, Q*bert and other digital and nondigital friends. So it seems strange to me that video games have earned a bad rap as anti-social brain drains. The outdated stereotype of the “gamer” remains a skinny, pimpled teenaged boy with thick glasses, hypnotized by a glowing screen—me at 15, in other words.

like I’m crazy: Duh, obviously. When I pose the question to colleagues and parents my age or older, I see the same puzzled expression—but for different reasons. If we want to understand the Gamer Generation, we need to play games with our kids and teens and then talk about our mutual experiences. At least that’s my excuse for booting up the PlayStation instead of doing chores. Some of my favourite moments with my son are when we team up for nine innings of Super Mega Baseball, a cartoony yet challenging game by a Victoria studio that includes a subtle message of diversity. That isn’t to say games are uniformly positive either. I’ve played enough Grand Theft Auto V to know the notorious gang-

Over the last few decades, video games have become more diverse, more social, more portable—hundreds can fit into a smartphone—and more sophisticated than a yellow puck munching pills and dodging ghosts. Games are now used for education, motivation, expression, competition, persuasion, even medication, and, yes, also diversion. Teenagers know that, of course. When I ask, “Can games be art?” in a class of university or high-school students, they look at me

ster simulation is a wildly creative social satire—and that I won’t let my kids play it until they’re 30. (That’s when I might also allow them to start dating.) “Game-based learning” and “gamification” have started to make inroads into education, too. At Quest to Learn, a public school in New York City, students master subjects by both playing and creating games. Jane McGonigal, the author of Reality is Broken: Why Games Make Us Better and How They Can Change the World, urges teachers, parents 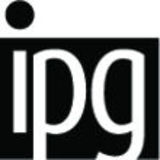