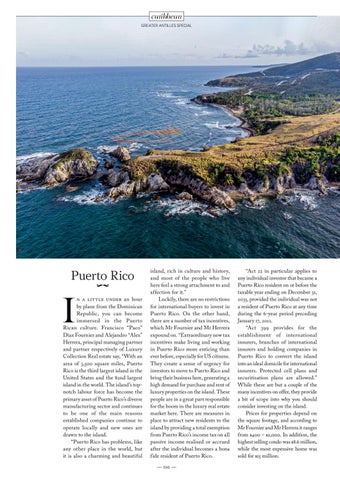 n a little under an hour by plane from the Dominican Republic, you can become immersed in the Puerto Rican culture. Francisco “Paco” Diaz Fournier and Alejandro “Alex” Herrera, principal managing partner and partner respectively of Luxury Collection Real estate say, “With an area of 3,500 square miles, Puerto Rico is the third largest island in the United States and the 82nd largest island in the world. The island’s topnotch labour force has become the primary asset of Puerto Rico’s diverse manufacturing sector and continues to be one of the main reasons established companies continue to operate locally and new ones are drawn to the island. “Puerto Rico has problems, like any other place in the world, but it is also a charming and beautiful

island, rich in culture and history, and most of the people who live here feel a strong attachment to and affection for it.” Luckily, there are no restrictions for international buyers to invest in Puerto Rico. On the other hand, there are a number of tax incentives, which Mr Fournier and Mr Herrera expound on. “Extraordinary new tax incentives make living and working in Puerto Rico more enticing than ever before, especially for US citizens. They create a sense of urgency for investors to move to Puerto Rico and bring their business here, generating a high demand for purchase and rent of luxury properties on the island. These people are in a great part responsible for the boom in the luxury real estate market here. There are measures in place to attract new residents to the island by providing a total exemption from Puerto Rico’s income tax on all passive income realised or accrued after the individual becomes a bona fide resident of Puerto Rico. 110

“Act 22 in particular applies to any individual investor that became a Puerto Rico resident on or before the taxable year ending on December 31, 2035, provided the individual was not a resident of Puerto Rico at any time during the 6-year period preceding January 17, 2012. “Act 399 provides for the establishment of international insurers, branches of international insurers and holding companies in Puerto Rico to convert the island into an ideal domicile for international insurers. Protected cell plans and securitisation plans are allowed.” While these are but a couple of the many incentives on offer, they provide a bit of scope into why you should consider investing on the island. Prices for properties depend on the square footage, and according to Mr Fournier and Mr Herrera it ranges from $400 – $2,000. In addition, the highest selling condo was $8.6 million, while the most expensive home was sold for $15 million.

The latest issue of International Property & Travel magazine showcases stunning properties in the Greater Antilles that are waiting to be bought. Travel to the Cayman Islands where its pristine beaches make for the perfect backdrop for a family home, or journey to Jamaica where the luxury abodes are set against verdant countryside, dramatic cliffs and pristine beaches. Once you’ve had your fill of the first two islands, venture to the Dominican Republic where the thriving agricultural industry and tax-friendly advantages are but a few of the reasons to invest in a property there. On the other hand, Puerto Rico has extraordinary new tax incentives, which you’ll have to read more about. We also showcase some brilliant homes in one of London’s wealthiest areas; Kensington. In addition, two award-winning companies ensure that you’re knowledgeable on the techniques needed to transform an ordinary kitchen into a luxurious space.