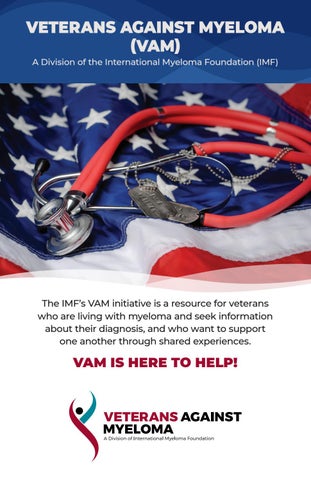 The IMFâ&amp;#x20AC;&amp;#x2122;s VAM initiative is a resource for veterans who are living with myeloma and seek information about their diagnosis, and who want to support one another through shared experiences.

VAM IS HERE TO HELP!

What is the VA MISSION Act? Signed into law in June 2018, the Maintaining Internal Systems and Strengthening Integrated Outside Networks (MISSION) Act gives veterans greater access to healthcare in VA facilities and in the community, and also expands benefits for caregivers.

The VA MISSION Act replaced the Veterans Choice Program and expands private healthcare options for VA patients. The goals of the changes are to expand patient access to approved non-VA medical providers (“community care”) and to assist rural patients or patients needing certain services not provided by the VA.

Caregiver benefits have been hailed as the highlight of the bill by Sen. Patty Murray (D-WA), who has been a champion for the issue. Originally, benefits first enacted in 2010 have been available only to caregivers of severely injured post-9/11 veterans.

MYELOMA AND MILITARY SERVICE VAM’s “Myeloma and Military Service” booklet is intended to help veterans with myeloma, their caregivers, and family members to better understand myeloma in relation to military service. This booklet is available at bit.ly/VAMbooklet and includes informa­ tion from the VA. We welcome your questions, as well as suggestions for future updates. Visit the Directory of Veterans Service Organizations (VSO) at va.gov/vso to determine eligibility for benefits or to start a claim. Only a VA-accredited VSO can help you prepare, present, or pursue claims for veterans’ benefits.

WHAT CAUSES MYELOMA? Let’s ask IMF chairman Dr. Brian G.M. Durie Many toxic chemicals are known to cause myeloma: •D ioxins in Agent Orange, a herbicide used by the U.S. military to destroy foliage and crops during the war in Vietnam •B enzene, one of the 20 most widely used chemicals in the U.S. •T he herbicide glyphosate, a main ingredient in the weed killer Roundup® that is widely used in agriculture, especially on genetically modified organism (GMO) crops.

MYELOMA SERVICE CONNECTIONS In most cases, a veteran with myeloma must show a causational link between their disease and their time in service, usually through exposure to a cancer-causing chemical or agent, as well as showing a link between that exposure and their disease. In some cases, a veteran is either presumed to have been exposed to a known disease-causing agent through their time in a certain area and the later development of said disease is assumed to have been caused by their exposure, or exposure to a certain agent is presumed to have resulted in the development of a later disease. Proof is required to show such exposure. Visit va.gov/vso if you believe you may be eligible for benefits.

Agent Orange You are presumed to have been exposed to Agent Orange if you are a Vietnam veteran who served anywhere in Vietnam during the war, in-country on the soil or on inland waterways, or sailed aboard a military vessel within 12 nautical miles from shore. Myeloma is a disease known to be caused by Agent Orange, and veterans are not required to show they were exposed to Agent Orange or other herbicides when seeking VA compen­sation for this. The VA offers eligible Veterans a free Agent Registry health exam. Contact a VSO or the VA to learn more.

Contaminated Drinking Water As part of its responsibility to evaluate health hazards at specific superfund (toxic) sites, the Agency for Toxic Substances and Disease Registry (ATSDR) has assessed drinking water contamin­ation at Camp Lejeune in North Carolina. The agency said that the evidence linking benzene exposure to the develop­ ment of myeloma was sufficient to allow the VA to consider a presumptive service connection based upon causal evidence. Visit bit.ly/toxicsubstance to learn more.

OCCUPATIONAL HAZARD EXPOSURE Even if you were never deployed, your military service may have brought you in contact with dangerous chemicals or agents while painting vehicles, working around a nuclear submarine, or storing weapons. Visit publichealth.va.gov/exposures and publichealth.va.gov/exposures/pfas.asp to learn more. Perfluoroalkyl and polyfluoroalkyl substances (PFAS) are synthetic chemicals found in many products. They are also present in aqueous film forming foam (AFFF) used by both civilian and military firefighters. These chemicals do not break down in the environment, and their presence is widespread. Concerns have recently been raised from communities surrounding bases about whether PFAS-contaminated ground water on military bases may be affecting off-base water supplies. The Department of Defense (DoD) is investigating the extent of PFAS contamination on its bases.

Military Firefighters In the 1970s, the DoD began using AFFF to fight fuel fires. The release of these chemicals into the environment during training and emergency responses is a major source of PFAS contamin­ ation of ground water on military bases. It has an effect on the bodies of firefighters who were exposed to these chemicals on a regular basis. The DoD is in process to discontinue the use of these AFFFs with PFAS. The VA does not often recognize the service connection between firefighting and cancer as a “presumptive service-connected disability” more than a year after active duty. The Michael Lecik Military Firefighters Protection Act extends the presumption of service connection and a 15-year post-service timeframe for certain cancers, including myeloma, to military firefighters. Visit bit.ly/HR5637 to contact your legislator and ask them to support this bill.

FIND A VETERANS SERVICE ORGANIZATION (VSO) You are not required to work with a VSO but we recommend that you do – a VSO can help you prepare, present, or pursue claims for veterans’ benefits. VSOs do not usually charge for services, and they are accredited by the VA. The VA provides a Directory of VSOs at va.gov/vso and we’ve provided a sample list of VSOs below: • The American Legion – legion.org • American Veterans (AMVETS) – amvets.org • Disabled American Veterans (DAV) – dav.org • Veterans of Foreign Wars (VFW) – vfw.org • Vietnam Veterans of America (VVA) – vva.org • National Association of American Veterans (NAAV) – naavets.org • Iraq and Afghanistan Veterans of America (IAVA) – iava.org • National Veterans Legal Services Program (NVLSP) – nvlsp.org • Military Officers Association of America (MOAA) – moaa.org.

The IMF’s VAM initiative is a resource for veterans who are living with myeloma and seek information about their diagnosis, and who want to support one another through shared experiences. 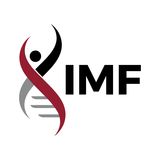 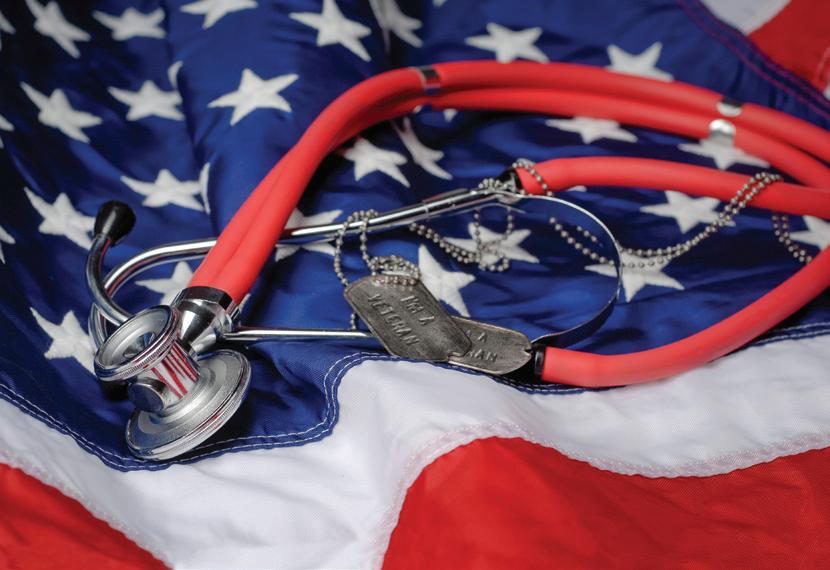 VAM IS HERE TO HELP!