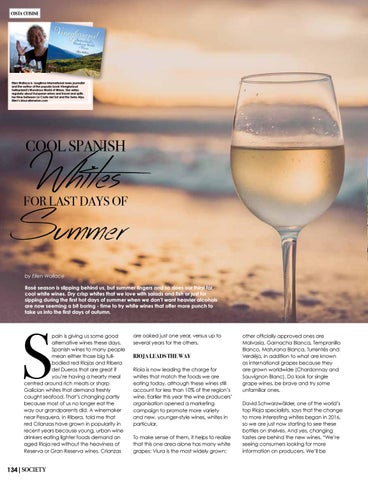 FOR LAST DAYS OF

Rosé season is slipping behind us, but summer lingers and so does our thirst for cool white wines. Dry crisp whites that we love with salads and fish or just for sipping during the first hot days of summer when we don’t want heavier alcohols are now seeming a bit boring - time to try white wines that offer more punch to take us into the first days of autumn.

pain is giving us some good alternative wines these days. Spanish wines to many people mean either those big fullbodied red Riojas and Ribera del Dueros that are great if you’re having a hearty meal centred around rich meats or sharp Galician whites that demand freshly caught seafood. That’s changing partly because most of us no longer eat the way our grandparents did. A winemaker near Pesquera, in Ribera, told me that red Crianzas have grown in popularity in recent years because young, urban wine drinkers eating lighter foods demand an aged Rioja red without the heaviness of Reserva or Gran Reserva wines. Crianzas

are oaked just one year, versus up to several years for the others.

RIOJA LEADS THE WAY Rioia is now leading the charge for whites that match the foods we are eating today, although these wines still account for less than 10% of the region’s wine. Earlier this year the wine producers’ organisation opened a marketing campaign to promote more variety and new, younger-style wines, whites in particular. To make sense of them, it helps to realize that this one area alone has many white grapes: Viura is the most widely grown;

other officially approved ones are Malvasía, Garnacha Blanca, Tempranillo Blanco, Maturana Blanca, Turrentés and Verdéjo, in addition to what are known as international grapes because they are grown worldwide (Chardonnay and Sauvignon Blanc). Do look for single grape wines, be brave and try some unfamiliar ones. David Schwarzwälder, one of the world’s top Rioja specialists, says that the change to more interesting whites began in 2016, so we are just now starting to see these bottles on shelves. And yes, changing tastes are behind the new wines. “We’re seeing consumers looking for more information on producers. We’ll be