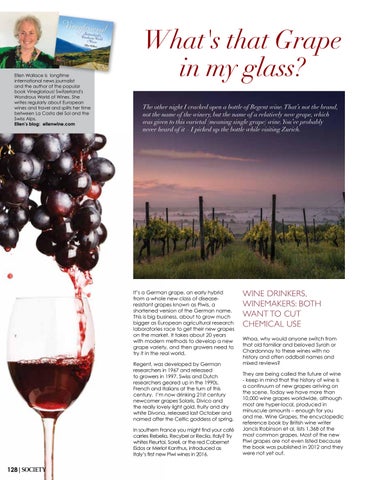 Ellen Wallace is longtime international news journalist and the author of the popular book Vineglorious! Switzerland&#39;s Wondrous World of Wines. She writes regularly about European wines and travel and splits her time between La Costa del Sol and the Swiss Alps. Ellen’s blog: ellenwine.com

What&#39;s that Grape in my glass? The other night I cracked open a bottle of Regent wine. That’s not the brand, not the name of the winery, but the name of a relatively new grape, which was given to this varietal (meaning single grape) wine. You’ve probably never heard of it – I picked up the bottle while visiting Zurich.

It’s a German grape, an early hybrid from a whole new class of diseaseresistant grapes known as Piwis, a shortened version of the German name. This is big business, about to grow much bigger as European agricultural research laboratories race to get their new grapes on the market. It takes about 20 years with modern methods to develop a new grape variety, and then growers need to try it in the real world. Regent, was developed by German researchers in 1967 and released to growers in 1997. Swiss and Dutch researchers geared up in the 1990s, French and Italians at the turn of this century. I’m now drinking 21st century newcomer grapes Solaris, Divico and the really lovely light gold, fruity and dry white Divona, released last October and named after the Celtic goddess of spring. In southern France you might find your café carries Rebelia, Recybel or Reclia. Italy? Try whites Fleurtai, Soreli, or the red Cabernet Eidos or Merlot Kanthus, introduced as Italy’s first new Piwi wines in 2016.

WINE DRINKERS, WINEMAKERS: BOTH WANT TO CUT CHEMICAL USE Whoa, why would anyone switch from that old familiar and beloved Syrah or Chardonnay to these wines with no history and often oddball names and mixed reviews? They are being called the future of wine - keep in mind that the history of wine is a continuum of new grapes arriving on the scene. Today we have more than 10,000 wine grapes worldwide, although most are hyper-local, produced in minuscule amounts – enough for you and me. Wine Grapes, the encyclopedic reference book by British wine writer Jancis Robinson et al, lists 1,368 of the most common grapes. Most of the new Piwi grapes are not even listed because the book was published in 2012 and they were not yet out.

Society Marbella is the most avidly read monthly magazine on the Costa del Sol. It is not just read as a lifestyle magazine: it is used as a reference guide for restaurant /club / bar, listings and reviews, local and international news, business, charity &cultural information, and general contact details. Society Marbella is literally grabbed off the shelves! A great deal of investment is put into the magazine to ensure the editorial is newsworthy and pacesetting. The format is contemporary and reader-friendly, offering a perfectly stylish backdrop for advertising