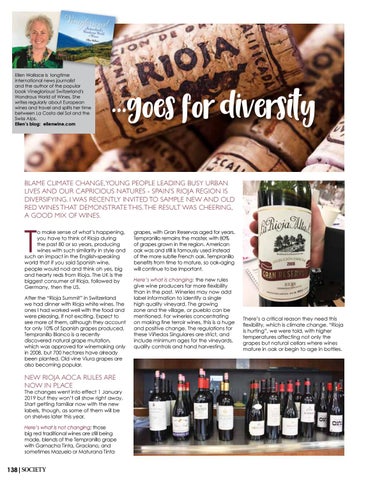 Ellen Wallace is longtime international news journalist and the author of the popular book Vineglorious! Switzerland&#39;s Wondrous World of Wines. She writes regularly about European wines and travel and splits her time between La Costa del Sol and the Swiss Alps. Ellen’s blog: ellenwine.com

BLAME CLIMATE CHANGE, YOUNG PEOPLE LEADING BUSY URBAN LIVES AND OUR CAPRICIOUS NATURES - SPAIN’S RIOJA REGION IS DIVERSIFYING. I WAS RECENTLY INVITED TO SAMPLE NEW AND OLD RED WINES THAT DEMONSTRATE THIS. THE RESULT WAS CHEERING, A GOOD MIX OF WINES.

o make sense of what’s happening, you have to think of Rioja during the past 80 or so years, producing wines with such similarity in style and such an impact in the English-speaking world that if you said Spanish wine, people would nod and think oh yes, big and hearty reds from Rioja. The UK is the biggest consumer of Rioja, followed by Germany, then the US. After the “Rioja Summit” in Switzerland we had dinner with Rioja white wines. The ones I had worked well with the food and were pleasing, if not exciting. Expect to see more of them, although they account for only 10% of Spanish grapes produced. Tempranillo Blanco is a recently discovered natural grape mutation, which was approved for winemaking only in 2008, but 700 hectares have already been planted. Old vine Viura grapes are also becoming popular.

The changes went into effect 1 January 2019 but they won’t all show right away. Start getting familiar now with the new labels, though, as some of them will be on shelves later this year. Here’s what is not changing: those big red traditional wines are still being made, blends of the Tempranillo grape with Garnacha Tinta, Graciano, and sometimes Mazuelo or Maturana Tinta

grapes, with Gran Reservas aged for years. Tempranillo remains the master, with 80% of grapes grown in the region. American oak was and still is famously used instead of the more subtle French oak. Tempranillo benefits from time to mature, so oak-aging will continue to be important. Here’s what is changing: the new rules give wine producers far more flexibility than in the past. Wineries may now add label information to identify a single high quality vineyard. The growing zone and the village, or pueblo can be mentioned. For wineries concentrating on making fine terroir wines, this is a huge and positive change. The regulations for these Viñedos Singulares are strict, and include minimum ages for the vineyards, quality controls and hand harvesting.

There’s a critical reason they need this flexibility, which is climate change. “Rioja is hurting”, we were told, with higher temperatures affecting not only the grapes but natural cellars where wines mature in oak or begin to age in bottles.

Society Marbella is the most avidly read monthly magazine on the Costa del Sol. It is not just read as a lifestyle magazine: it is used as a reference guide for restaurant /club / bar, listings and reviews, local and international news, business, charity &cultural information, and general contact details. Society Marbella is literally grabbed off the shelves! A great deal of investment is put into the magazine to ensure the editorial is newsworthy and pacesetting. The format is contemporary and reader-friendly, offering a perfectly stylish backdrop for advertising