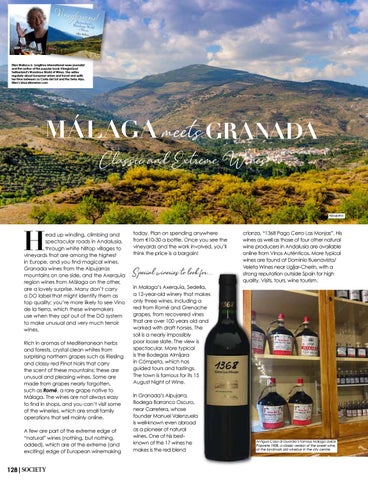 ead up winding, climbing and spectacular roads in Andalusia, through white hilltop villages to vineyards that are among the highest in Europe, and you find magical wines. Granada wines from the Alpujarras mountains on one side, and the Axerquìa region wines from Málaga on the other, are a lovely surprise. Many don’t carry a DO label that might identify them as top quality; you’re more likely to see Vino de la tierra, which these winemakers use when they opt out of the DO system to make unusual and very much terroir wines. Rich in aromas of Mediterranean herbs and forests, crystal clean whites from surprising northern grapes such as Riesling and classy red Pinot Noirs that carry the scent of these mountains: these are unusual and pleasing wines. Some are made from grapes nearly forgotten, such as Romé, a rare grape native to Málaga. The wines are not always easy to find in shops, and you can’t visit some of the wineries, which are small family operations that sell mainly online. A few are part of the extreme edge of “natural” wines (nothing, but nothing, added), which are at the extreme (and exciting) edge of European winemaking

today. Plan on spending anywhere from €10-30 a bottle. Once you see the vineyards and the work involved, you’ll think the price is a bargain!

Special wineries to look for...

crianza, “1368 Pago Cerro Las Monjas”. His wines as well as those of four other natural wine producers in Andalusia are available online from Vinos Auténticos. More typical wines are found at Dominio Buenavista/ Veleta Wines near Ugíjar-Cherin, with a strong reputation outside Spain for high quality. Visits, tours, wine tourism.

in Malaga’s Axerquìa, Sedella, a 12-year-old winery that makes only three wines, including a red from Romé and Grenache grapes, from recovered vines that are over 100 years old and worked with draft horses. The soil is a nearly impossibly poor loose slate. The view is spectacular. More typical is the Bodegas Almijara in Cómpeta, which has guided tours and tastings. The town is famous for its 15 August Night of Wine. In Granada’s Alpujarra, Bodega Barranco Oscuro, near Carretera, whose founder Manuel Valenzuela is well-known even abroad as a pioneer of natural wines. One of his bestknown of the 17 wines he makes is the red blend