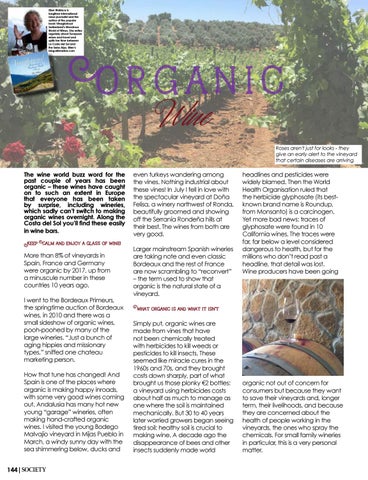 Roses aren&#39;t just for looks - they give an early alert to the vineyard that certain diseases are arriving

The wine world buzz word for the past couple of years has been organic – these wines have caught on to such an extent in Europe that everyone has been taken by surprise, including wineries, which sadly can’t switch to making organic wines overnight. Along the Costa del Sol you’ll find these easily in wine bars. Keep Calm and enjoy a glass of wine! More than 8% of vineyards in Spain, France and Germany were organic by 2017, up from a minuscule number in these countries 10 years ago. I went to the Bordeaux Primeurs, the springtime auction of Bordeaux wines, in 2010 and there was a small sideshow of organic wines, pooh-poohed by many of the large wineries. “Just a bunch of aging hippies and missionary types,” sniffed one chateau marketing person. How that tune has changed! And Spain is one of the places where organic is making happy inroads, with some very good wines coming out. Andalusia has many hot new young “garage” wineries, often making hand-crafted organic wines. I visited the young Bodego Malvajío vineyard in Mijas Pueblo in March, a windy sunny day with the sea shimmering below, ducks and 144

even turkeys wandering among the vines. Nothing industrial about these vines! In July I fell in love with the spectacular vineyard at Doña Felisa, a winery northwest of Ronda, beautifully groomed and showing off the Serranía Rondeña hills at their best. The wines from both are very good. Larger mainstream Spanish wineries are taking note and even classic Bordeaux and the rest of France are now scrambling to “reconvert” – the term used to show that organic is the natural state of a vineyard.

headlines and pesticides were widely blamed. Then the World Health Organisation ruled that the herbicide glyphosate (its bestknown brand name is Roundup, from Monsanto) is a carcinogen. Yet more bad news: traces of glyphosate were found in 10 California wines. The traces were far, far below a level considered dangerous to health, but for the millions who don’t read past a headline, that detail was lost. Wine producers have been going

What organic is and what it isn&#39;t Simply put, organic wines are made from vines that have not been chemically treated with herbicides to kill weeds or pesticides to kill insects. These seemed like miracle cures in the 1960s and 70s, and they brought costs down sharply, part of what brought us those plonky €2 bottles: a vineyard using herbicides costs about half as much to manage as one where the soil is maintained mechanically. But 30 to 40 years later worried growers began seeing tired soil: healthy soil is crucial to making wine. A decade ago the disappearance of bees and other insects suddenly made world

organic not out of concern for consumers but because they want to save their vineyards and, longer term, their livelihoods, and because they are concerned about the health of people working in the vineyards, the ones who spray the chemicals. For small family wineries in particular, this is a very personal matter.