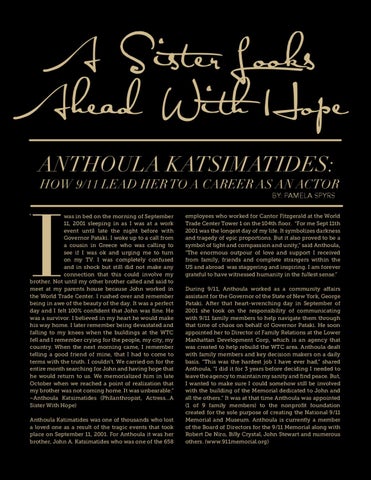 was in bed on the morning of September 11, 2001 sleeping in as I was at a work event until late the night before with Governor Pataki. I woke up to a call from a cousin in Greece who was calling to see if I was ok and urging me to turn on my TV. I was completely confused and in shock but still did not make any connection that this could involve my brother. Not until my other brother called and said to meet at my parents house because John worked in the World Trade Center. I rushed over and remember being in awe of the beauty of the day. It was a perfect day and I felt 100% confident that John was fine. He was a survivor. I believed in my heart he would make his way home. I later remember being devastated and falling to my knees when the buildings at the WTC fell and I remember crying for the people, my city, my country. When the next morning came, I remember telling a good friend of mine, that I had to come to terms with the truth. I couldn’t. We carried on for the entire month searching for John and having hope that he would return to us. We memorialized him in late October when we reached a point of realization that my brother was not coming home. It was unbearable.” ~Anthoula Katsimatides (Philanthropist, Actress…A Sister With Hope) Anthoula Katimatides was one of thousands who lost a loved one as a result of the tragic events that took place on September 11, 2001. For Anthoula it was her brother, John A. Katsimatides who was one of the 658

employees who worked for Cantor Fitzgerald at the World Trade Center Tower 1 on the 104th floor. “For me Sept 11th 2001 was the longest day of my life. It symbolizes darkness and tragedy of epic proportions. But it also proved to be a symbol of light and compassion and unity,” said Anthoula, “The enormous outpour of love and support I received from family, friends and complete strangers within the US and abroad was staggering and inspiring. I am forever grateful to have witnessed humanity in the fullest sense.”  During 9/11, Anthoula worked as a community affairs assistant for the Governor of the State of New York, George Pataki. After that heart-wrenching day in September of 2001 she took on the responsibility of communicating with 9/11 family members to help navigate them through that time of chaos on behalf of Governor Pataki. He soon appointed her to Director of Family Relations at the Lower Manhattan Development Corp, which is an agency that was created to help rebuild the WTC area. Anthoula dealt with family members and key decision makers on a daily basis. “This was the hardest job I have ever had,” shared Anthoula, “I did it for 3 years before deciding I needed to leave the agency to maintain my sanity and find peace. But, I wanted to make sure I could somehow still be involved with the building of the Memorial dedicated to John and all the others.” It was at that time Anthoula was appointed (1 of 9 family members) to the nonprofit foundation created for the sole purpose of creating the National 9/11 Memorial and Museum. Anthoula is currently a member of the Board of Directors for the 9/11 Memorial along with Robert De Niro, Billy Crystal, John Stewart and numerous others. (www.911memorial.org)