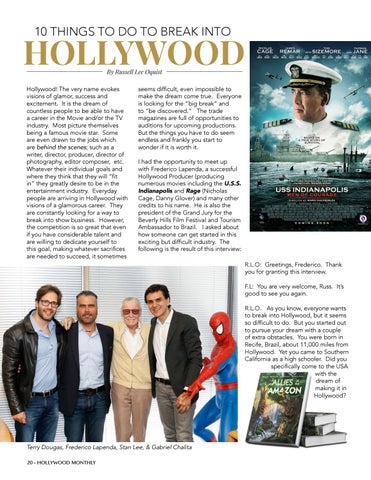 10 THINGS TO DO TO BREAK INTO

Hollywood! The very name evokes visions of glamor, success and excitement. It is the dream of countless people to be able to have a career in the Movie and/or the TV industry. Most picture themselves being a famous movie star. Some are even drawn to the jobs which are behind the scenes; such as a writer, director, producer, director of photography, editor composer, etc. Whatever their individual goals and where they think that they will “fit in” they greatly desire to be in the entertainment industry. Everyday people are arriving in Hollywood with visions of a glamorous career. They are constantly looking for a way to break into show business. However, the competition is so great that even if you have considerable talent and are willing to dedicate yourself to this goal, making whatever sacrifices are needed to succeed, it sometimes

seems difficult, even impossible to make the dream come true. Everyone is looking for the “big break” and to “be discovered.” The trade magazines are full of opportunities to auditions for upcoming productions. But the things you have to do seem endless and frankly you start to wonder if it is worth it. I had the opportunity to meet up with Frederico Lapenda, a successful Hollywood Producer (producing numerous movies including the U.S.S. Indianapolis and Rage (Nicholas Cage, Danny Glover) and many other credits to his name. He is also the president of the Grand Jury for the Beverly Hills Film Festival and Tourism Ambassador to Brazil. I asked about how someone can get started in this exciting but difficult industry. The following is the result of this interview: R.L.O: Greetings, Frederico. Thank you for granting this interview. F.L: You are very welcome, Russ. It’s good to see you again. R.L.O. As you know, everyone wants to break into Hollywood, but it seems so difficult to do. But you started out to pursue your dream with a couple of extra obstacles. You were born in Recife, Brazil, about 11,000 miles from Hollywood. Yet you came to Southern California as a high schooler. Did you specifically come to the USA with the dream of making it in Hollywood?

Hollywood Monthly's 10 Things To Do To Break Into Hollywood