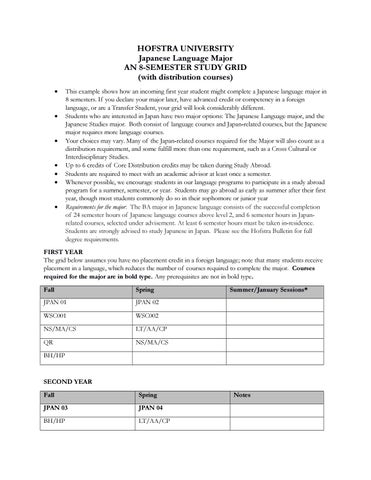 This example shows how an incoming first year student might complete a Japanese language major in 8 semesters. If you declare your major later, have advanced credit or competency in a foreign language, or are a Transfer Student, your grid will look considerably different. Students who are interested in Japan have two major options: The Japanese Language major, and the Japanese Studies major. Both consist of language courses and Japan-related courses, but the Japanese major requires more language courses. Your choices may vary. Many of the Japan-related courses required for the Major will also count as a distribution requirement, and some fulfill more than one requirement, such as a Cross Cultural or Interdisciplinary Studies. Up to 6 credits of Core Distribution credits may be taken during Study Abroad. Students are required to meet with an academic advisor at least once a semester. Whenever possible, we encourage students in our language programs to participate in a study abroad program for a summer, semester, or year. Students may go abroad as early as summer after their first year, though most students commonly do so in their sophomore or junior year Requirements for the major: The BA major in Japanese language consists of the successful completion of 24 semester hours of Japanese language courses above level 2, and 6 semester hours in Japanrelated courses, selected under advisement. At least 6 semester hours must be taken in-residence. Students are strongly advised to study Japanese in Japan. Please see the Hofstra Bulletin for full degree requirements.

For more information and to meet your faculty, visit our Department website at https://www.hofstra.edu/academics/colleges/hclas/cll/index.html

What can I do with a degree in Japanese? Many things! An undergraduate degree program in Japanese or Japanese studies provides many important skills to launch a successful career path. In addition to acquiring proficiency in Japanese, students develop excellent skills in oral and written communication, gain an understanding of other societies and cultures, and learn to analyze issues critically. This degree helps prepare graduates for careers requiring familiarity with multicultural perspectives. Graduates work in many fields, such as education, journalism, business, law and diplomacy, and travel and tourism. Graduates in comparative literature may become teachers and scholars, journalists, lawyers, librarians, literary or film critics, consultants, public relations specialists, and translators. In addition, the structure of our program allows most students to major in Japanese and another major. 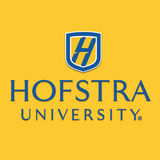