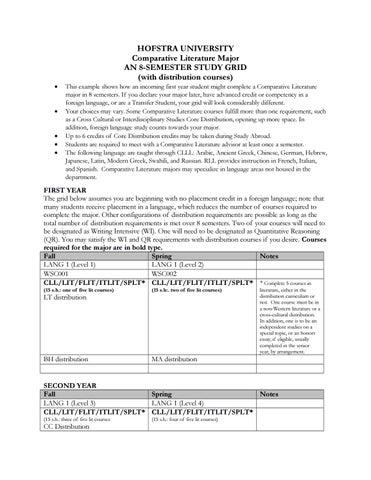 This example shows how an incoming first year student might complete a Comparative Literature major in 8 semesters. If you declare your major later, have advanced credit or competency in a foreign language, or are a Transfer Student, your grid will look considerably different. Your choices may vary. Some Comparative Literature courses fulfill more than one requirement, such as a Cross Cultural or Interdisciplinary Studies Core Distribution, opening up more space. In addition, foreign language study counts towards your major. Up to 6 credits of Core Distribution credits may be taken during Study Abroad. Students are required to meet with a Comparative Literature advisor at least once a semester. The following language are taught through CLLL: Arabic, Ancient Greek, Chinese, German, Hebrew, Japanese, Latin, Modern Greek, Swahili, and Russian. RLL provides instruction in French, Italian, and Spanish. Comparative Literature majors may specialize in language areas not housed in the department.

FIRST YEAR The grid below assumes you are beginning with no placement credit in a foreign language; note that many students receive placement in a language, which reduces the number of courses required to complete the major. Other configurations of distribution requirements are possible as long as the total number of distribution requirements is met over 8 semesters. Two of your courses will need to be designated as Writing Intensive (WI). One will need to be designated as Quantitative Reasoning (QR). You may satisfy the WI and QR requirements with distribution courses if you desire. Courses required for the major are in bold type. Fall Spring Notes LANG 1 (Level 1) LANG 1 (Level 2) WSC001 WSC002 CLL/LIT/FLIT/ITLIT/SPLT* CLL/LIT/FLIT/ITLIT/SPLT* * Complete 5 courses in (15 s.h.: one of five lit courses)

literature, either in the distribution curriculum or not. One course must be in a non-Western literature or a cross-cultural distribution. In addition, one is to be an independent studies on a special topic, or an honors essay, if eligible, usually completed in the senior year, by arrangement.

For more information and to meet your faculty, visit our Department website at https://www.hofstra.edu/academics/colleges/hclas/cll/index.html What can I do with a degree in Comparative Literature? An undergraduate degree program in Comparative Literature provides many important skills to launch a successful career path. In addition to acquiring proficiency in two languages, Comparative Literature majors develop excellent skills in oral and written communication, gain an understanding of other societies and cultures, and learn to analyze issues critically. This degree helps prepare graduates for careers requiring familiarity with multicultural perspectives. Graduates work in many fields, such as education, journalism, business, law and diplomacy, and travel and tourism. Graduates in comparative literature may become teachers and scholars, journalists, lawyers, librarians, literary or film critics, consultants, public relations specialists, and translators. https://www.hofstra.edu/academics/colleges/hclas/cll/cll-career-potential.html

NOTES * Comparative Literature majors are not required to take Summer or January courses (for which there is no financial aid). You can readily complete your degree in four years if you begin studying languages your first year or have advanced placement in one or more language areas. ** We encourage Comparative Literature Majors to add a double major or minor in one of their language areas or in their cognate elective area. Students who come in with advanced placement in languages are able to do this readily. *** Because the Comparative Literature minor features unique breadth, most students are able to complete a minor or double major in an additional area. ****We encourage students to study abroad when possible. In addition to going on study abroad for either semester in their third year, students can go for the entire academic year in their third year, for a semester in their second or fourth years, or for a short-term program in the summer or during the January break. For the comparative literature major, study abroad is especially helpful in completing required language credits efficiently.