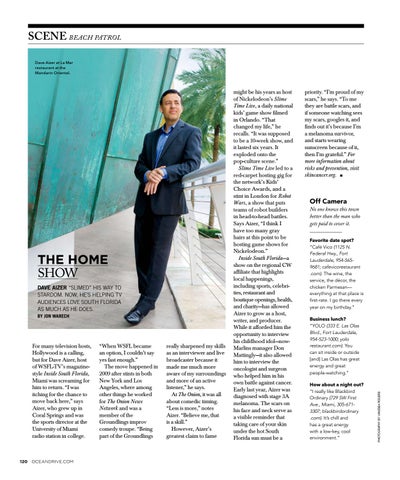 Dave aizer “slimed” his way to stardom. Now, he’s helpiNg tV audieNces loVe south Florida as much as he does. by jon warech

For many television hosts, Hollywood is a calling, but for Dave Aizer, host of WSFL-TV’s magazinestyle Inside South Florida, Miami was screaming for him to return. “I was itching for the chance to move back here,” says Aizer, who grew up in Coral Springs and was the sports director at the University of Miami radio station in college.

“When WSFL became an option, I couldn’t say yes fast enough.” The move happened in 2009 after stints in both New York and Los Angeles, where among other things he worked for The Onion News Network and was a member of the Groundlings improv comedy troupe. “Being part of the Groundlings

really sharpened my skills as an interviewer and live broadcaster because it made me much more aware of my surroundings and more of an active listener,” he says. At The Onion, it was all about comedic timing. “Less is more,” notes Aizer. “Believe me, that is a skill.” However, Aizer’s greatest claim to fame

priority. “I’m proud of my scars,” he says. “To me they are battle scars, and if someone watching sees my scars, googles it, and finds out it’s because I’m a melanoma survivor, and starts wearing sunscreen because of it, then I’m grateful.” For more information about risks and prevention, visit skincancer.org.

Off Camera No one knows this town better than the man who gets paid to cover it. Favorite date spot? “Café Vico (1125 N. Federal Hwy., Fort Lauderdale, 954-5659681; cafevicorestaurant .com). The wine, the service, the décor, the chicken Parmesan— everything at that place is first-rate. I go there every year on my birthday.” Business lunch? “YOLO (333 E. Las Olas Blvd., Fort Lauderdale, 954-523-1000; yolo restaurant.com). You can sit inside or outside [and] Las Olas has great energy and great people-watching.” How about a night out? “I really like Blackbird Ordinary (729 SW First Ave., Miami, 305-6713307; blackbirdordinary .com). It’s chill and has a great energy with a low-key, cool environment.”

might be his years as host of Nickelodeon’s Slime Time Live, a daily national kids’ game show filmed in Orlando. “That changed my life,” he recalls. “It was supposed to be a 10-week show, and it lasted six years. It exploded onto the pop-culture scene.” Slime Time Live led to a red-carpet hosting gig for the network’s Kids’ Choice Awards, and a stint in London for Robot Wars, a show that puts teams of robot builders in head-to-head battles. Says Aizer, “I think I have too many gray hairs at this point to be hosting game shows for Nickelodeon.” Inside South Florida—a show on the regional CW affiliate that highlights local happenings, including sports, celebrities, restaurant and boutique openings, health, and charity—has allowed Aizer to grow as a host, writer, and producer. While it afforded him the opportunity to interview his childhood idol—nowMarlins manager Don Mattingly—it also allowed him to interview the oncologist and surgeon who helped him in his own battle against cancer. Early last year, Aizer was diagnosed with stage 3A melanoma. The scars on his face and neck serve as a visible reminder that taking care of your skin under the hot South Florida sun must be a 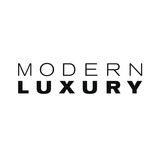