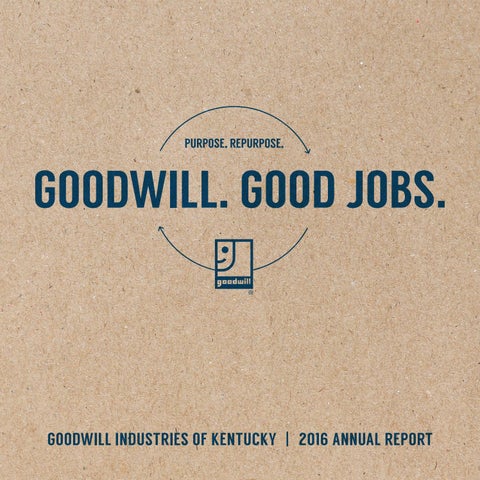 LETTER FROM THE CEO & CHAIR Dear friends: Goodwill has a rich history of empowering job seekers, strengthening communities, and improving lives. Because of your support, we are able to carry out our mission of helping Kentuckians find meaningful opportunities to work. Goodwill is most commonly known for its stores, but many are unaware of how important our retail program really is. In addition to the jobs that are created within each store, donations of previouslyloved belongings help Goodwill repurpose both goods and lives. Last year, we diverted more than 50 million pounds of items from landfills by repurposing goods from more than one million donors. Perhaps most importantly – and relevant to our mission – revenue from these donations allowed Goodwill to help Kentuckians repurpose their lives. Samantha and Kenneth, featured within this report, both turned to Goodwill when they were faced with redefining their purpose in the working world. We hold true to our mission by recognizing ability, convinced that people often just need a chance to show what they can do. We are prepared and equipped to provide individualized resources to help Kentuckians

overcome obstacles—whether physical, emotional, or circumstantial—that could prevent them from obtaining employment. When people have the ability to work and support themselves, they experience self-sufficiency and dignity. In 2016, we were proud to help 2,859 Kentuckians find jobs, and looking ahead, we are committed to helping thousands more discover their purpose.

Goodwill matches these seniors with nonprofit organizations or public agencies in the community for paid, on-the-job training in a professional work environment. Training is paid by the SCSEP program, which is part of the federal Older Americans Act. The program helps seniors find work, giving preference to those who have physical or mental disabilities, are veterans or spouses of veterans, or who need job training. While the older worker is learning new skills, Goodwill works with him or her to transition into permanent employment, either at the agency where they trained or with another employer in the community.

Through SCSEP, which was implemented in February 2017, Goodwill helps connect older Kentuckians with opportunities for training and employment. Goodwill identifies individuals age 55 and older who meet specific criteria, such as income requirements, and then assesses their skills and abilities.

“With this type of program, everyone wins,” said Lori Collins, Goodwill’s vice president of program services for the eastern half of Kentucky. “The participants have the opportunity to broaden their skills and gain critical work experience, and employers have access to a trained, motivated pool of job candidates.”

Sen. Rand Paul visits Goodwill to discuss employment opportunities for Kentuckians with criminal backgrounds In June 2016, Kentucky Senator Rand Paul visited Goodwill’s regional office in Louisville to discuss ways to help Kentuckians with criminal backgrounds return to the workforce. “[I] had a great meeting with Goodwill today. I’m very impressed with [its] work on criminal justice and helping people get a second chance by finding work and having a successful life. Criminal justice reform is an important issue Republicans and Democrats can and should work on together,” Rand Paul posted on his Facebook page following the event.

Goodwill operates multiple programs throughout the state that assist former offenders in their search for employment. These programs address issues and skills that could affect employability as an individual leaves the justice system and transitions to the workforce. In 2016, Goodwill served 621 former offenders.

“It took a network of people to make Cars to Work a reality, and Larry Craig and Ron Jackson were instrumental in paving the way for Goodwill to establish the program,” said Amy Luttrell, president & CEO of Goodwill Industries of Kentucky. “Additionally, Bob DeWeese was a champion for legislation that has had tremendous impact on Goodwill’s ability to provide meaningful services.” More than 190 people were in attendance, and numerous corporations, foundations, and individuals supported the event, including four gold-level sponsors: Anthem Medicaid, USI Insurance Services, PNC Bank, and Stoll Keenon Ogden.

n May 2006, 13-year-old Samantha woke up, paralyzed from the chest down. Unable to sit up, she rolled herself out of bed and yelled for help. She was rushed to Vanderbilt Children’s Hospital, where the medical team gave her parents the tragic prognosis: Samantha was not likely to survive the night. Ten years later, Samantha plays softball, rides her bike, and works part-time at a Goodwill store in Bowling Green. A decade ago, accomplishing these feats seemed nearly impossible, considering Samantha was told she’d never walk again. Samantha was diagnosed with transverse myelitis, a disorder caused by inflammation of the spinal cord. “At first, the diagnosis was not easy to accept. I was very angry that I was missing my softball games,” Samantha said. Samantha spent two weeks in the hospital, followed by two more weeks of physical rehabilitation. In July, she was sent home, and in August, she started seventh grade using a walker. Just two months later, Samantha was using only a cane. Despite being told her progress would plateau after one year, Samantha recently regained feeling in her right ankle – just two days before the 10-year anniversary of the diagnosis.

Samantha has not let her disability restrict her. Prior to working at Goodwill, she worked four part-time jobs while attending school, all while refusing to use parking spaces reserved for people with disabilities. “Working at Goodwill has been a blessing for me,” Samantha said. “Because of the flexible hours, I am able to use the weekends to study. I love interacting with my co-workers and our customers. Working at Goodwill has actually helped my body progress, because I’m in constant motion, and my muscles are stabilizing.” Samantha participates in Goodwill’s community employment program* and works one-on-one with Joanna Yates, a Goodwill job counselor. Together, they work on Samantha’s living arrangements, relationships, vocational rehabilitation, goal setting, and career development. “Samantha’s determination and spirit inspire me to work harder and happier,” Joanna said. “I am so proud of all she’s accomplished.” *The community employment program provides job coaching and support for Goodwill employees in an effort to help them maintain and succeed in their employment.

hen Kenneth was released from a seven-year prison sentence, he knew he faced an uphill battle in reentering the workforce.

“The most devastating part was hurting the people who believed in me,” Kenneth said. My mom cried every time she saw me behind bars.” Having already earned a master’s degree during his teaching career, Kenneth completed a certificate program in electrical technology and tutored GED classes while incarcerated. Kenneth was released from prison in October 2015 and was placed at a hotel, where he had 90 days to stay. Each day, Kenneth walked up to ten miles to attend career fairs and search for work. “Every time I had to go back to my hotel room without a job lead, I felt defeated. To stay positive, I began journaling. I told myself that even if I walked ten miles in search for employment and failed, at least I had the opportunity to exercise. In addition to journaling, I sent ‘thank you’ cards to everyone I came in contact with, even those who couldn’t help me.” Three weeks after his release, Kenneth attended a job fair in eastern Kentucky, where he met Mary Mills, employment technician for Goodwill. “I specifically sought out Goodwill at the job fair. I spent a lot of time talking to Mary, and I knew she was genuine and in a position to help me,” said Kenneth. “I needed someone to see me for me. Mary did that.”

Mary added, “At Goodwill, we believe in the power of work. We have the resources to help those who are reentering the workforce. We want them to become contributing members of their communities. We want them to know that if they are willing to work hard, they deserve a second chance.” In November 2015, Kenneth secured full-time employment with a federal contractor, and a month later, he obtained permanent housing. “When I found out I received a job, I was ecstatic,” said Kenneth. “I immediately called Mary to tell her the good news.” In addition to successfully holding down a job, Kenneth attends treatment to support his transition from prison. He also participates in a community service project by writing personal letters in notebooks to distribute to homeless shelters. In them, he shares his story and encourages the readers to never give up or lose hope, despite their current circumstances. Kenneth said, “The notebooks offer an outlet for me, but they also give me the opportunity to help and encourage others who are facing similar challenges.” No two letters are the same, and Kenneth provided a sample, which appears on the following page.

First of all, I would like to share a little about myself. I am a 38-year-old male. I recently had to restart my life because of really bad choices I made. I have done well with that, but it wasn’t easy, and it wasn’t without struggles. I am giving you this notebook, because I want you to use it as a means for success. Many times when we are faced with obstacles too great to face alone, we see ourselves as failures …What I did to stay focused was journal in a notebook. Each day, I wrote something positive. Some days, I had to dig deep for the positive. Over time, I realized that my failures in life did not make me a failure at life. I saw the failures as opportunities, even though I can’t have the life I once had back. Please never see yourself as a failure; you are not. See your past failures as turning points and opportunities. Life is full of challenges, but use your greatness and determination to always move forward.”

AVERAGE WAGE OF PROGRAM PARTICIPANTS PLACED INTO JOBS OUTSIDE OF GOODWILL:

CFC of the National Capital Area

The Community Foundation of Louisville

The David B. Stevens Revocable Trust

Grand Chapter of Kentucky, Order of the Eastern Star

GOODWILL INDUSTRIES OF KENTUCKY HELPS PEOPLE WITH DISABILITIES OR OTHER DISADVANTAGES ACHIEVE AND MAINTAIN EMPLOYMENT TO GAIN A BETTER QUALITY OF LIFE.

Goodwill Industries of Kentucky is accredited in Vocational Evaluation Services.

An EEO/AA employer: Minorities/Females/Veterans/Individuals with Disabilities 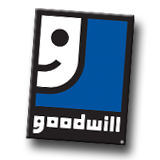