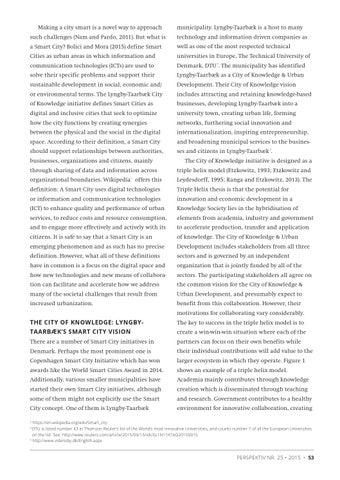 Making a city smart is a novel way to approach

municipality. Lyngby-Taarbæk is a host to many

technology and information driven companies as

well as one of the most respected technical

Cities as urban areas in which information and

universities in Europe, The Technical University of

communication technologies (ICTs) are used to

Denmark, DTU 4. The municipality has identified

solve their specific problems and support their

Lyngby-Taarbæk as a City of Knowledge &amp; Urban

sustainable development in social, economic and/

Development. Their City of Knowledge vision

businesses, developing Lyngby-Taarbæk into a

digital and inclusive cities that seek to optimize

how the city functions by creating synergies

between the physical and the social in the digital

space. According to their definition, a Smart City

and broadening municipal services to the busines-

should support relationships between authorities,

ses and citizens in Lyngby-Taarbæk 5.

The City of Knowledge initiative is designed as a

through sharing of data and information across

Triple Helix thesis is that the potential for

or information and communication technologies

innovation and economic development in a

(ICT) to enhance quality and performance of urban

Knowledge Society lies in the hybridisation of

elements from academia, industry and government

and to engage more effectively and actively with its

to accelerate production, transfer and application

citizens. It is safe to say that a Smart City is an

of knowledge. The City of Knowledge &amp; Urban

emerging phenomenon and as such has no precise

Development includes stakeholders from all three

definition. However, what all of these definitions

sectors and is governed by an independent

have in common is a focus on the digital space and

organization that is jointly funded by all of the

how new technologies and new means of collabora-

sectors. The participating stakeholders all agree on

tion can facilitate and accelerate how we address

the common vision for the City of Knowledge &amp;

many of the societal challenges that result from

Urban Development, and presumably expect to

benefit from this collaboration. However, their motivations for collaborating vary considerably.

The City of Knowledge: Lyngby-­

The key to success in the triple helix model is to

create a win-win-win situation where each of the

There are a number of Smart City initiatives in

partners can focus on their own benefits while

Denmark. Perhaps the most prominent one is

their individual contributions will add value to the

larger ecosystem in which they operate. Figure 1

shows an example of a triple helix model.

started their own Smart City initiatives, although

creation which is disseminated through teaching

some of them might not explicitly use the Smart

and research. Government contributes to a healthy

City concept. One of them is Lyngby-Taarbæk

https://en.wikipedia.org/wiki/Smart_city DTU is listed number 43 in Thomson Reuter’s list of the World’s most innovative Universities, and counts number 7 of all the European Universities on the list. See: http://www.reuters.com/article/2015/09/15/idUSL1N11K16Q20150915 5 http://www.vidensby.dk/English.aspx 3