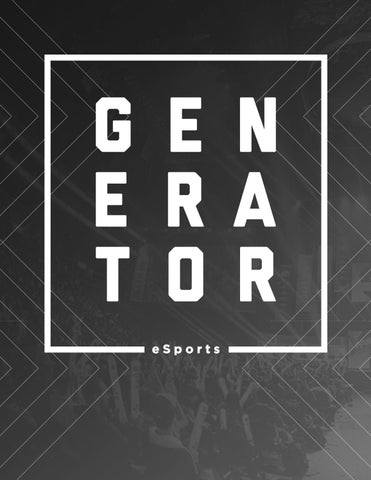 T H E R I S E OF eS po r t s AN ESTIMATED FIVE PERCENT OF THE world’s population is watching eSports in 2017. Just watching — that figure excludes the players, game publishers, media and broadcasting companies, advertising affiliates, sponsorships, merchandise and personnel who support this $696 million market, projected to reach $1.5B by 2020.[1] The NBA announced as of March 2018, NBA teams will tryout and select the professional gamers who will represent their franchises, including contracts and sponsorship rights.[2] There are currently 40 colleges in the US with varsity gaming programs, and over 30 colleges that offer scholarships to gamers.[3] These are a few of many changes coming to the eSports industry in the United States in the next year; all of which indicate eSports and competitive gaming have become part of mainstream culture in North America. Major events and competitions are pulling viewership north of 40M unique online viewers, with in-person attendance currently at a record 170,000 people.[4] Advances in technology and streaming have expanded what was once a niche and limited market to a global audience that is growing an average of 40% per year.[1] Professional teams in Europe and Asia have coaches, scouts, trainers and dedicated facilities that can include housing.

These factors combine to present a challenge to more traditional competitive sports markets: how can facilities and franchises capitalize on this booming industry? Generator Studio, an architecture &amp; design firm, has been closely following trends in the eSports market, including the impact on existing facilities and new purpose-built facilities, player and audience statistics, and forecasted trends to answer this question. Both new and existing venues can increase their revenue streams by becoming relevant to eSports events. Whether purpose-built or through renovation, a venue should have: the flexibility to tailor the experience to audience size; the ability to appeal to a young, tech-savvy and social mediadriven demographic; and the potential to capture revenue streams associated with expanding the eSports experience beyond the confines of a venue. We specialize in ensuring that existing venues stay competitive, analyzing venues top-to-bottom to help teams determine their path to future relevancy and financial sustainability. Leveraging our expertise in sports facilities, renovation and marketplace trends, Generator is uniquely poised to help organizations integrate the future of the competitive gaming industry into venues previously designed solely for traditional sports and events.

MORE POPULAR THAN THE SUPER BOWL ESPORTS IS A FAST-GROWING INDUSTRY. “Most think the events garner a few thousand attendees. Most would not expect them to be more popular than the Superbowl (sic) but the finale of the 2017 World Championship (Intel® Extreme Masters) in Katowice, Poland just set a record for live attendance - more than 173,000 attendees - that’s about 100,000 more than the Superbowl last year. The Intel® Extreme Masters World Championship 2017 reached more than 46 million unique online viewers. To put that figure in context, per Nielsen, the Trump inauguration TV audience was 30.6 million. [...] 70 linear and digital partners produced and distributed content worldwide in 19 languages. This is a money making operation.”

Adapting VS. PURPOSE BUILDING TO BUILD OR NOT TO BUILD? With the rapid growth of eSports globally and the ever-increasing popularity in North America, facilities are scrambling to determine if and how to evolve their venues to appeal to the growing live event eSports market. Purpose built eSports arenas have gained momentum in the US in the last 2 years. ESPORTS arena has 3 dedicated venues built or under construction. The 4,200 seat Washington Wizards practice facility is intended for NBA and WNBA use, but was also designed to house a local professional eSports team and eSports events. An existing arena can adapt to meet the demands of an eSports event by supplementing technology systemsaccess to multiple video boards, clear audio, mobile connectivity and wi-fi. Depending on the game, a single second can determine the outcome. The audience should have the ability to stay tuned into the action whether on the floor, in a seat, in line at a concession, or in the restroom. They key in both cases? Flexibility. A venue should be able to accommodate various group sizes. Drawing major events means more capacity, but as popularity rises so will live event frequency. Having a venue that feels intentionally tailored to the size and interests of the eSports audience will capitalize on the future growth and revenue potential of this booming market.

CA SE ST U DY gfinity arena | london, england Gfinity Arena opened in 2015 and was the first dedicated eSports venue to open in the UK. Maximum capacity of the venue is 600 people; 200 per stage with a total of 3 screen spaces. Constructed from a renovated movie theater, Gfinity Arena expanded their events list to include game releases and sneak peek or preview parties to review pending game releases. Gfinity Arena is located in the Fulham Broadway Retail Centre to allow fans easy access to public transportation, hotel rooms, and bars and restaurants for pre/post event activities.

all images above via Gfinity pic &amp; Joe Brady Photography

C A SE STUDY ESPORTS ARENA | 3 LOCATIONS, USA eSports Arena has 3 locations in the United States operating or under construction; Santa Ana, CA; Oakland, CA; and Las Vegas, NV. Each venue is tailored to its locale and regional eSports market. In addition to the permanent locations, Esports Arena is currently developing a mobile truck that can host pop up eSports events, dubbed ESA Drive. Find out more about eSports Arenaâ&amp;#x20AC;&amp;#x2122;s ongoing events and projects at esportsarena.com.

M U LT I P U R P O S E A R E N A eSPORTS VENUE DESI GN STUDY Generator Studio undertook a design study for a multipurpose arena with an eSports team as the primary tenant. The arena holds 3,800 people at maximum capacity and can accommodate a full sized basketball court and floor events. The arena is 3 stories above ground to allow restaurant and bar infill to engage the street-front below, and spills the action out into a multi-story entertainment district. Anchoring the arena with an entertainment district gives fans a variety of tailored experience options, and provides various revenue, sponsorship and branding opportunities.

ESL ONE C OLOGNE 2017 Cloud 9 walks to the stage at the semi-finals at Lanxess Arena image via Helena Kristiansson, ESL

WITH THE GROWTH OF REGIONAL ESPORTS LEAGUES flexible venue capacity is key to hosting multiple events. Each configuration should feel tailored to the audience size.

A sampling of Generator's eSports expertise. 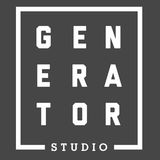