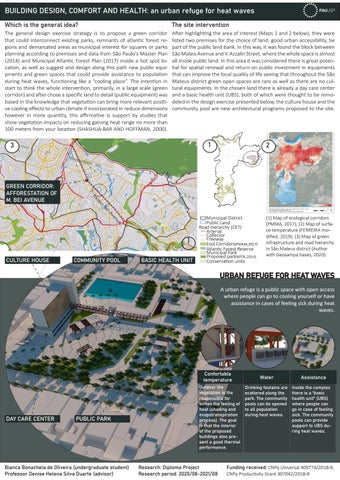 BUILDING DESIGN, COMFORT AND HEALTH: an urban refuge for heat waves Which is the general idea?

The general design exercise strategy is to propose a green corridor that could interconnect existing parks, remnants of atlantic forest regions and demarcated areas as municipal interest for squares or parks planning according to premises and data from São Paulo’s Master Plan (2014) and Municipal Atlantic Forest Plan (2017) inside a hot spot location, as well as suggest and design along this path new public equipments and green spaces that could provide assistance to population during heat waves, functioning like a “cooling place”. The intention in start to think the whole intervention, primarily, in a large scale (green corridor) and after chose a specific land to detail (public equipment) was based in the knowledge that vegetation can bring more relevant positive cooling effects to urban climate if incorporated in reduce dimensions however in more quantity, this affirmative is support by studies that show vegetation impacts on reducing gaining heat range no more than 100 meters from your location (SHASHUA-BAR AND HOFFMAN, 2000).

After highlighting the area of interest (Maps 1 and 2 below), they were listed two premises for the choice of land: good urban accessibility, be part of the public land bank. In this way, it was found the block between São Mateo Avenue and V. Azzalin Street, where the whole space is almost all inside public land. In this area it was considered there is great potential for spatial renewal and return on public investment in equipments that can improve the local quality of life seeing that throughout the São Mateus district green open spaces are rare as well as there are no cultural equipments. In the chosen land there is already a day care center and a basic health unit (UBS), both of which were thought to be remodeled in the design exercise presented below, the culture house and the community pool are new architectural programs proposed to the site.

URBAN REFUGE FOR HEAT WAVES A urban refuge is a public space with open access where people can go to cooling yourself or have assistance in cases of feeling sick during heat waves.

Outdoor the vegetation is the responsible for soften the feeling of heat (shading and evapotranspiration process). The goal is that the interior of the proposed buildings also present a good thermal performance.

Drinking foutains are scattered along the park. The community pools can be opened to all population during heat waves.

Inside the complex there is a “basic health unit” (UBS) where people can go in case of feeling sick. The community pools can provide support to UBS during heat waves. 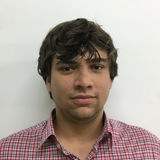