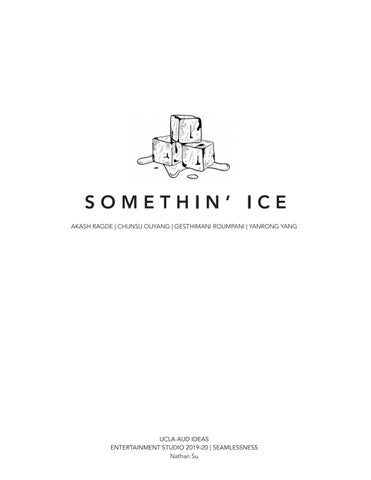 CASE STUDY: @ICE. BAIT (Instagram, 2019) Art, regardless of the means it was created by or the primary medium it was intended for, is subject to criticism more than ever, as larger masses are exposed to it through social media and general online presence. In this context, curating what the public has access to and in what ways, allows an artist to manipulate how their artâ&amp;#x20AC;&amp;#x2122;s value is defined.

For the purpose of this course, our team used Ice Bait (@ice.bait), a contemporary artist with instagram presence, as a case study to break down and examine the techniques &amp; strategies she uses to increase her artâ&amp;#x20AC;&amp;#x2122;s value through documentation, exclusivity, and ownership.

SIGNATURE STYLE Ice Bait is working with a single, consistent theme throughout her work and online posts, which allows her to build a signature style. Her art is focused on creating large format ice cubes with “trapped” orange people inside them.

at companies that make ice blocks, it becomes clear that it takes knowledge and skill to manipulate qualities like ice translucency, surface imperfections, and placing objects in it. These decisions allow an seductive interaction between the final cube and lights around it.

Why ice cubes? Ice bait is treating ice and its qualities as the first step to create an art object with subtle yet intricate characteristics. At first glance, the theme might seem mundane; how hard is it to create an ice cube, only larger? However, looking

The transient nature of ice limits the life span of Ice Bait’s art, fabricating a sense of exclusivity to those who have encountered one of these objects before they melted. This is the first step to generating buzz around tracing the location of these art objects in a timely manner.

Preventing forgery Despite the aforementioned intricacies of the ice cube, it would still be fairly easy to claim someone has encountered Ice Baitâ&amp;#x20AC;&amp;#x2122;s art, and even own one of the orange people that are left behind once the ice cube melts. How does the artist prevent forgery? Similarly to the uniqueness of QR codes, each orange person has a serial number on its back, that can later be verified as a real or fake.

STORYBUILDING A storybuilding strategy is essential for the artist to establish a relationship between the public and the art object, and evoke certain emotions.

ESTABLISHING EXPERTISE &amp; INTENSION a. The workshop Revealed in a series of photographs, Ice Baitâ&amp;#x20AC;&amp;#x2122;s workshop / studio captures a sense of mystery that evokes curiosity about the process behind the making of the ice cubes. Although the ice we see is mainly on display, there are elements that suggest this is where the artist finalizes the detailing and stores her end product.

This glimpse to her workshop contrasts the secret identity of Ice Bait, and allows her followers to understand more about how she works and develop a sense of familiarity with the artistâ&amp;#x20AC;&amp;#x2122;s daily life. One can easily recognize similar elements among the workshop photos, suggesting this might all be taking place in the same room.

c. Aesthetics Regardless of content, Ice Bait only posts images and videos of specific aesthetics, popular among social media culture. All photographs are shot in a dark environment highlighted by colored lights. The dark background generates contrast with the light source, creating an atmospheric ambience. This setup is very beneficial and flattering for the ice cubes that absord the light refraction from their surroundings.

INTERACTION STRATEGY Interaction with the public and discourse generation can affect an artworkâ&amp;#x20AC;&amp;#x2122;s value. Considering Ice Bait has not revealed her identity yet, what interaction strategies does she follow to manage her reputation?

Ice Baitâ&amp;#x20AC;&amp;#x2122;s instagram profile layout is crafted so as to read holistically. Photographs are tiled to occupy six tiles each, which allows followers to observe the details in the photographs. There are no pictures of people or the artist herself, which indicates she treats instagram as a form of portfolio.

The insta-stories she publishes are all reposted from other public profiles and depict her exterior installations. We can observe the following common characteristics among those images: â&amp;#x20AC;˘ All are taken during nighttime and are using ambient lighting from an artificial light source, which is particularly flattering for the ice.

â&amp;#x20AC;˘ The stories as posted by the original profiles all include location tags, which is how Ice Bait is able to find them and choose the ones she wants to repost.

ii. WEBSITE The biography section of Ice Bait includes a link to her website. The websiteâ&amp;#x20AC;&amp;#x2122;s only function encourages guests to input the serial number they have found on the orange people left behind after the ice cubes have melted. Those

who possess a genuine orange figurine can successfully move to the next page, which reveals statistics about how many figurines have been verified, how many are remaining, and how many fake reports have been attempted.

iii. OTHER REDDIT THREAD Through our research on Ice Bait, we also encountered a reddit thread where she was the main subject of interest. Reading the comments and speculations everyone talks about is quite entertaining in itself, and allows us to take a look at the general publicâ&amp;#x20AC;&amp;#x2122;s mind.

In 2017, the Wildlife Photographer of the Year award given by the National History Museum in London, was given to Marcio Cabral for his spectacular photo of an anteater titled “The Night Raider”. A few months after the award announcement, suspisions were raised and the jury had wildlife experts re-examine the picture. Eventually it was determined that Marcio had staged his photograph with a taxidermy animal and the appropriate composition. The photographer’s strategy for fabricating this fiction can be broken down to 3 main points:

• Taking advantage of the fact that the majority of people connect to wildlife only through pictures, which makes it easier to manipulate their perception. • Staging a phenomenon that can happen, but is actually very rare; so the audience really wanted to believe he was lucky enough to have captured it. • Describing the struggles of capturing the picture in great detail contributes to the veracity of the story. On the right page, we have speculated a workflow Marcio might have followed to achieve his final product.

Hatsune Miku is a fictional pop star sensation that started as a drawing. In 2007, Crypton Future released their vocaloid software and used an illustration of Hatsune Miku to embelish their product’s packaging. Due to most people being unfamiliar with the term “vocaloid”, as soon as they heard the girly voice generated by the software, many assumed it belonged to the girl on the packaging. Of course, she was in the form of an anime; but everyone already knew of other artists hiding behind illustrations (eg. the Gorillaz).

Crypton Future saw that confusion as a window of opportunity, so they decided to turn Hatsune into a pop star. Popularity was achieved through a carefully structured strategy, that included polls and questionnaires regarding the public’s preferences and then reflecting those on Hatsune’s appearance and behavior. Since then, Hatsune has grown into a widely recognized and accomplished figure, performing alongside famous artists (eg. opening a Lady Gaga concert) and even leading her own tour.

DEDUCTIONS The aforementioned case studies were used as pointers to understand what elements are combined to make a fiction believable. In order to construct our own fiction (Ice Bait), we isolated a few elements from successful fiction strategies: • Consistency along the story. • Creating an aesthetically pleasing result will make the audience want to believe it. • Following popular visualization trends appeal to a wider audience. • Inciting speculations about the fiction increases the public’s interest in it.

Rendered ice in photograph, day Deciding our fiction was one thing, representing it visually was another. From the very beginning it was clear that rendering a realistic ice material poses several struggles, including but not limited to: texturing, lighting, shadow casting, caustics etc.

Rendered ice in photograph, night After experimenting with scales, shapes, techniques, and light conditions, we concluded that using a large format cubic shape would help make our fiction more believable.

ii. PHYSICAL Physical exercises were employed in three different ways: • Manufacturing actual ice cubes in order to examine material qualities and different levels of translucency that can realistically be achieved. This back-andforth between digital and physical ice allowed for attention to detail when creating the ice material for our renderings.

• 3D printing orange figurines and generating a unique serial number database. The ability to have tangible evidence to support the reality of our fiction was of great importance to our project. • Photography of actual places. Blending photography with rendering blurs the line between what is real and what not.

The content of our images was not predetermined. We tried out various potential settings before determining to focus our imagery on two main areas: • The artist’s workshop. Visualizing a workspace that is mysterious and intriguing yet reveals elements of the artist’s workflow (sculpting tools, water purification tanks, etc) adds a layer of

iv. COMPOSITION &amp; AESTHETICS The last step was to determine a specific strategy when composing imagery (whether rendered or photographed) and a cohesive color palette. The aim was to imitate a single personâ&amp;#x20AC;&amp;#x2122;s aesthetics and create the illusion of Ice Bait making deliberate choices based on personal taste.