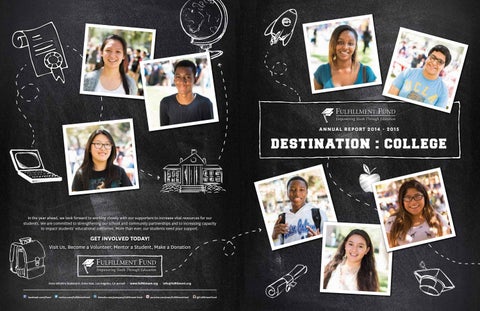 In the year ahead, we look forward to working closely with our supporters to increase vital resources for our students. We are committed to strengthening our school and community partnerships and to increasing capacity to impact students’ educational outcomes. More than ever, our students need your support.

GET INVOLVED TODAY! Visit Us, Become a Volunteer, Mentor a Student, Make a Donation

DESTINATION : COLLEGE A Message from the CEO In this report, “Destination: College,” you’ll hear from some of the hundreds of Fulfillment Fund scholars now attending colleges and universities across the country. You’ll also meet some of the more than 2,500 high school students we served in the 2014-15 academic year, including: • Lennox Markley, a 11th grade student at Crenshaw High School in South Los Angeles who dreams of becoming a doctor. • Jazmah Freeman, a 11th grade student at Hamilton High School who believes college is the key to having a “successful, meaningful, comfortable life.” • Kimberly Martinez, a 12th grade student at Gertz-Ressler High School near downtown LA, who wants to go to college in tribute to her mother, who didn’t finish elementary school.

“ In my family, no one has even graduated high school. A Fulfillment Fund advisor entered the room when I was in 9th grade. She introduced herself and she talked about the Fulfillment Fund. That was the moment I realized, I had an epiphany, that I’m going to college.” Israel Mazas New Open World (NOW) Academy (graduation expected 2016) Photo taken at Destination College, UCLA

• Noah Oluwide, a 11th grade student at King-Drew Medical Magnet who immigrated with his family from Nigeria and plans to “stay focused, motivated and inspire others.” • Israel Mazas, a 12th grade studentt at New Open World (NOW) Academy in Koreatown who, later this year, will become the first in his family to graduate high school and go on to college. These students face daunting challenges and yet, with your support, they are destined for college. We’re incredibly proud that more than 95% of our 12th graders graduated from high school in the 2014-15 academic year, and of those graduates, 96% reported that they planned to attend college in the fall. These are remarkable outcomes, and they wouldn’t be possible without you. On behalf of the Fulfillment Fund, I would especially like to thank you and all those who contributed time, energy and financial resources to make a tremendous difference in the lives of our city’s young people and their families.

“ Though I have st ruggled, I have m anaged to keep a smile on my fa ce. Every day I thank Fulfillment Fund for being th e root of my ed ucation and givin me the push to f g urther my educ ation. If it wasn’t for Fulfillment Fu nd and the staff helping me, I wouldn’t be stan ding where I am standing today.” alacely Alvarez, Fulfillment Fund D UC Riverside, B.

A. in Chicano St

WHAT IS THE NEED FOR OUR WORK?

The lowest income Americans who obtain a college degree are

By 2020, of U.S. jobs will require some form of postsecondary education, but only roughly of U.S. working-age adults hold a postsecondary credential.

more likely than their peers to escape poverty.* Source: Pew Charitable Trust, “Moving On Up,” 2013 *86% of Fulfillment Fund high school students are eligible for free or reduced-price meals (FRPM), indicating a household income that falls below $600/week for a family of four.

WHAT IS THE IMPACT OF OUR WORK? Nationally, only about half of high school graduates from low-income communities enroll in college. Thanks to the services the Fulfillment Fund provides, more than of our 12th graders graduate from high school with the intention of going to college.

Whereas nationally, only 10.9% of low-income, first-generation students who enroll in four-year colleges graduate within six years, of Fulfillment Fund scholars do.**

Source: Pell Institute, Pell Institute Fact Sheet, Dec. 2011 **Those who enrolled in a four-year institution in 2009; based on available data; national economic downturn in 2008 led to increased hardship for our already economically under-resourced students (ripple effect)

WHAT WE DO: We help students growing up in L.A.’s educationally and economically under-resourced communities see college as a key destination on their life’s journey.

WHO DO WE SERVE?

“I was not in the magnet track section or any special program, but I did have the Fulfillment Fund. In every step of the way, the Fulfillment Fund staff was always there for support and advice. Their mentorship and a few words of encouragement transformed the mindset of a Manual Arts High school student seven years ago.”

HOW MUCH SERVICE DO WE PROVIDE?

We served a total of which represents a

65% identify as Latino/a and 22% as African American

students participated in at least one program event or college trip

college students, with $472,625 $2.4 million in total gift aid was awarded to being dispersed directly from Fulfillment Fund as scholarships with an additional $13,200 as textbook stipends * 89 students were dually enrolled which means they were enrolled in both the Mentor Program and College Access Program. This number is subtracted to avoid double counting.

“I want to go to college so I can make a difference within my generation and my tradition. When the Fulfillment Fund came into my life, it was like a family member that motivated me to do more, to go one step ahead and not give up.” Noah Oluwide King-Drew Medical Magnet (graduation expected 2017) Photo taken at Destination College, UCLA

“This past semester I was able to volunteer at the Fulfillment Fund’s Destination College event as a chaperone. It felt great giving personal advice to high school students about the endless opportunities one can receive by continuing their education after high school.” Daniel Gutierrez-Medina Fulfillment Fund Scholar Marymount California University, B.A. Liberal Arts, with an emphasis in Biomedical Science and Arts &amp; Media (2015)

“If it were not for the Fulfillment Fund, I am not sure where I would be now. I love my new school. I love how everyone I am surrounded by is aiming for something higher in life.” Jasmine Obienu Fulfillment Fund Scholar California State University, East Bay, B.S. in Biology and Chemistry (degree expected June 2017) Transferred from LA Trade Technical College in 2014

“Destination College has proven to me that as a minority student, I should not let anything prevent me from going to college or make me feel like I can’t go,” an 11th grade participant said after the event on Saturday, Sept. 19, 2015, which included workshops, a campus tour, and a college fair.

“I work hard. I try my hardest not to give up in whatever I’m doing. I want to go to college because I want to be an example for my younger brother and my sister.” Lennox Markley Crenshaw High School (graduation expected 2017) Photo taken at Destination College, UCLA

FULFILLMENT FUND UNIVERSITY “Summer melt” - the phenomenon in which collegebound high school graduates abandon their plans over the course of the summer - disproportionately affects first-generation, under-resourced students of color. That’s why every summer we host Fulfillment Fund University, a unique interactive college simulation event designed to prepare incoming college students –and their parents – for the realities of college life. FULFILLMENT FUND ANNUAL REPORT 2014 - 2015

â&amp;#x20AC;&amp;#x153;During high school the Fulfillment Fund organized and funded many helpful workshops and tours including campus visits and Destination College. I would not have known so much about the variety of colleges that are out there waiting for students to apply. Now that I am out of high school, many might think the interaction between students and the Fulfillment Fund would disintegrate. That is not the case. They still keep in touch and have open arms to students. I cannot stop saying thank you enough.â&amp;#x20AC;? Gary Carbajal Fulfillment Fund Scholar UC Santa Cruz, B.A. in Robotic Engineering (degree expected June 2017)

“It warms my heart to know that the Fulfillment Fund cares about my success. The kind gestures, such as the Starbucks gift cards that I receive during finals week, add fuel to my fire and help me to burn the midnight oil and pass my final exams. Because of the Fulfillment Fund scholarship… I am able to show other minorities in my family and community that higher education is absolutely achievable.” Jalisa Moss Fulfillment Fund Scholar California State University, Long Beach, B.S. Biology (2015)

FINANCIAL SUPPORT For the 2014-15 academic year, $2.4 million in total gift aid was awarded to NEW college students through FAFSA completion, verification, and one-on-one counseling via the Scholarships team; if returning scholars are factored into the aforementioned total, it becomes $5.5 million. Additionally, 316 students received financial support directly from Fulfillment Fund in the form of scholarships ($472,625) and textbook stipends ($13,200).

The Fulfillment Fund is committed to making college a reality for young people growing up in educationally and economically under-resourced communities. We leverage your generosity and our community partnerships to ensure that students have support necessary to overcome obstacles and graduate high school and go on to college. Here’s a quick look at where your investment goes.

LEADERSHIP COUNCIL The Fulfillment Fund Leadership Council is a dynamic group of young professionals with a passion for education and a genuine desire to make a difference in our community. Leadership Council members volunteer time and resources to support the organization’s work to help young people from under-resourced communities achieve a college education.

“Fulfillment Fund University showed me that in order to be successful in college, I have to be able to manage my time wisely and to be smart about all the choices I make. This way, I’ll be strong enough to defeat the challenges I encounter along my way.”

Executive Assistant to the CEO

Executive Assistant to the COO

“I want to be a sponge and soak up as much information as I can. And later, share it with everyone else.” Abraham Cobian (and his mentor Robert Urband) New Designs Charter School (graduation expected 2017) Photo taken at Destination College, UCLA

FRIENDS OF THE FULFILLMENT FUND BOARD OF DIRECTORS 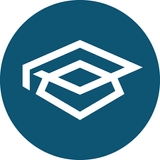