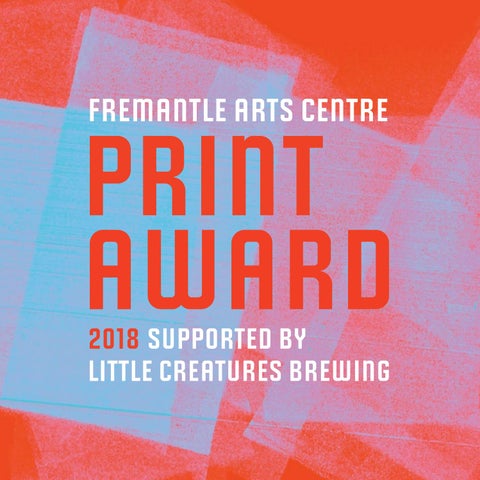 IT’S GOOD TO BE A LITTLE DIFFERENT

The Fremantle Arts Centre Print Award continues as the leading print award in Australia due largely to the generous support of our sponsors Little Creatures Brewing (Lion). Fremantle Arts Centre, City of Fremantle is also grateful to the longstanding support of the state government, via the Department of Local Government, Sport and Cultural Industries. The prestige of the FAC Print Award continues as printmakers all over the country vie to be selected for the exhibition, while for the prize winners the accolade is a significant career boost, and the cash prizes a real benefit. Every year the Print Award offers up to the public a generous, varied and compelling exhibition that is a snapshot of the best of contemporary Australian printmaking. Thank you to the judges, for the expertise and diligence they brought to their task. The credibility and gravitas of the award is only maintained through having a quality judging panel with national representation and perspective. Particular thanks to Emma Buswell for her success in her second year as FAC Print Award Coordinator. Jim Cathcart Director Fremantle Arts Centre

This year we celebrate 18 years of Little Creatures. As we officially â&amp;#x20AC;&amp;#x153;come of ageâ&amp;#x20AC;? we reflect on the things that have been, and always will be, important to us. Creativity. Creativity brings new ideas to the table, creativity makes the world an interesting place, creativity makes us smile. Community. Everything we do, we do to bring people together, whether it be in our home in Fremantle or the world beyond. Inclusivity and individuality. Embracing whatever makes you a little different, whatever makes you happy, you are welcome. It is our great honour and privilege to be part of an award that so completely embodies creativity, diversity, openness and community connection. As always, thank you to the artists who continue to inspire and create in our communities. Claire Donovan Marketing &amp; Community Coordinator WA Little Creatures Brewing

This year’s Fremantle Arts Centre Print Award supported by Little Creatures Brewing continues the award’s history of representing the forefront of printmaking in Australia. Now in its 43rd year, the award and accompanying exhibition offer an exciting and refreshing glimpse into the power of print and demonstrate the multiformity of this diverse medium. Here at Fremantle Arts Centre, the works in this year’s exhibition, from established, emerging and experimental makers and thinkers engage in the ongoing conversation surrounding contemporary print making and its place in Australian art. The 50 artworks selected for this year’s award demonstrate the scope of the medium. In keeping with the history of the award, Fremantle Arts Centre invited a panel of industry professionals from across Australia to select the most technically brilliant, conceptually rigorous and exciting prints and artists’ books from a pool of 273 entries. This year’s guest judges were: Lisa Roet (VIC) – Senior Australian artist and previous winner of the non-acquisitive award at the 2011 Fremantle Print Award; Ron Bradfield (WA) – Bardi man, story

teller; arts consultant and advocate for regional and rural development within the cultural sector; Annika Kristensen (VIC): Senior Curator, Australian Centre of Contemporary Art (ACCA), Melbourne; and Charlotte Hickson (WA) â&amp;#x20AC;&amp;#x201C; Exhibitions Manager at PICA. After two intense rounds of judging in June and August, the works in the resulting exhibition offer up an exciting glimpse into the state of contemporary printmaking today. Personal stories and cultural histories are shared through plate, press, image and ink. Now more than ever, the power of print to distribute ideas and stories is evident in the generosity of the work on show. emma buswell PRINT AWARD COORDINATOR FREMANTLE ARTS CENTRE

now more than ever, the power of print to distribute ideas and stories is evident in the generosity of the work on show

judges’ commentary Established in 1976 the Fremantle Arts Centre Print Award, supported by Little Creatures Brewing marks its 43rd year in 2018. Over its history this annual award has upheld and promoted the medium of print in all its forms and has supported practitioners to continue longstanding traditions and techniques through the emergence of a digital age. In its lifetime this award has witnessed the development and integration of new modes of production and distribution that have altered the practice and materiality of print media. During this shift the Print Award has at once championed the specificity of established print processes while also offering a platform that embraces experimentation and tests the conceptual frameworks of this broad medium. The breadth of practice this award has come to attract is on display in this year’s exhibition. Presented here is an intergenerational group of practitioners who each have a different approach to the traditions and innovations of print media. The final selection includes works that explore both impact and non-impact methods of printing and the conceptual and technical principles of matrix, substrate and impression. We would like to congratulate all the artists selected to participate in this year’s exhibition. Collectively these works demonstrate not only strength in diversity of practice in the arts community but asserts the multiplicity of

contemporary cultural experiences across this country. Amy Perejuan-Capone’s holding breath, 2018 co-opts the atmospheric elements of a polar night in Longyearbyen, Svalbard to create crystallized impressions that carry with them inklings of the climatic extremities from which they were produced. Garth Henderson’s constructive_botanics/banksia_grandis 02, 2017 takes a technological leap from the traditions of botanical art with a digital rendering that uses 3D computer modelling to mimic the naturally occurring structure of the banksia grandis. The resulting image alludes to a post-natural digital future where organic structures are replicated by algorithms. Jamie Powell uses lithography to create an impenetrable surface of asemic writing with the piece Inverse Variation, 2017. The iterative possibilities of print are used to compose an overarching structure of order from an intricate and illegible surface. AHC McDonald’s, Angel Under The Solandra Vine, 2018 is a work with a succinct narrative and endearing character that disarms and enamours. These are each works among the 50 finalists which demonstrate the ways in which print continues to permeate expansive forms of contemporary practice. This year’s Acquisitive Prize was awarded to Deana Hitti’s Towla, which the artists describes as a “cultural transaction” between herself, who

is Australian born and her late father, Antonios El Hitti a migrant from Lebanon. This volume pays homage to the pairs daily practice of playing backgammon or táwla when Hitti was a child. The pages hold Antonios El Hitti’s instructions for backgammon phonetically transcribed in both the Arabic and Latin alphabet. The artist explains that “The Arabic letters spell the instructions in English and the Latin letters spell the instructions in Arabic”. Towla presents a dialogue between her father’s homeland and his adopted country through which the artist articulates the joys and challenges of growing up biculturally in Australia. This work is a caretaker of memory that carries forward and shares the imprint of a family history. Across the two days of judging we each found ourselves returning to the work of Fiona Elisala, whose linocut Uman was presented with the NonAcquisitive Award. Elisala works at Moa Arts on Mua Island in the Torres Strait. Uman documents three generations of women practicing weaving. As the artist describes “Uman means weaving, teaching and knitting together, so that the knowledge is passed on.” Weaving was taught to Elisala by her grandmother and forms part of her practice along with linocut, etching, and screen-printing. For Elisala these practices are daily reinforcements of her cultural identity and the building blocks of her community. Elisala describes how the basket at the bottom of the image represents the collective knowledge that is

shared when gathering together, it is a vessel that cares for and retains the past for the future. Towla and Uman are works that offer an invitation to understand the experiences of these artists and how their practices record and maintain heritage and traditions that are shared within communities across generations. We would like to acknowledge and thank Fremantle Arts Centre staff and management for facilitating an award and judging process that allows time and space for honest consideration of these works and rigorous conversation. It is the dialogue that is encouraged around these works that gives the award depth and integrity and ensures it will remain a critical platform for generations of practitioners as the future of print media emerges. Ron Bradfield (WA) Bardi man, story teller; arts consultant and advocate for regional and rural development within the cultural sector; Lisa Roet (VIC) Senior Australian artist and previous winner of the non-acquisitive award at the 2011 Fremantle Print Award Charlotte Hickson (WA) Exhibitions Manager at PICA

Deanna Hitti is an Australian artist based in Melbourne with Lebanese heritage. Her artist books are recipients of major Australian Artist Book awards including The Libris Award. Her works have been short listed in numerous Australian art prizes and she has exhibited nationally and internationally in group and solo shows. During the last three years, Hitti has undertaken extensive research through artist residencies in Australia, China, Venice and Lebanon. Her works have been acquired by major Australian collections including The State Library of Victoria and The National Library of Australia.

Fiona Elisala is an emerging artist and Torres Strait Islander woman who uses printmaking as a platform for sharing her values, beliefs and unique identity. Fiona believes that it is these values that â&amp;#x20AC;&amp;#x153;can impact the lives of our family, community and who we are as individuals. Art is my tool for retaining and retelling the stories of my people and cultureâ&amp;#x20AC;?.

Mariia Zhuchenko (NSW) Wind Will Blow On My Skin When I Run Away, 2018 Image transfer on recycled paper 49 × 130cm

A special thank you to our long-term partner Little Creatures Brewing for their enduring support of this significant national award. Heartfelt thanks to this year’s judging panel: Annika Kristensen, Ron Bradfield, Lisa Roet and Charlotte Hickson for the respect and proficiency they brought to this year’s award and selection process. Fremantle Arts Centre would like to thank in particular the partnership with Curtin University and the third year Bachelor of Art (Fine Art) Practicum students, who have undertaken their Professional Practicum Internship at Fremantle Arts Centre. Thank you to the following students who have significantly contributed to the preparation and delivery of this year’s Award: Ali Watson, Ella Steiner, Lewis Inglis, Natsumi de Dianous, Ruth Loveridge and Cara Teusner-Gartland. A special thanks also to Dr Sheridan Coleman for her peerless efforts in assisting on this year’s award and to Jim Cathcart for his support.

+ 61 8 9432 9555 10amâ&amp;#x20AC;&amp;#x201C;5pm 7 days fac.org.au Fremantle Arts Centre is supported by the State Government through the Department of Local Government, Sport and Cultural Industries.

Your guide to the 2018 Fremantle Arts Centre Print Award supported by Little Creatures Brewing. Read the judges' essay, see the winners' works and view a selection of entries from the 50 finalists. The Fremantle Arts Centre Print Award, now in its 43rd year, is Australia's most prestigious print prize and presents the best of traditional printmaking alongside cutting edge techniques. The exhibition is open Fri 14 Sept – Sun 4 Nov 2018 | Free Entry 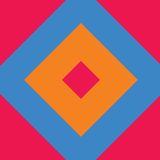