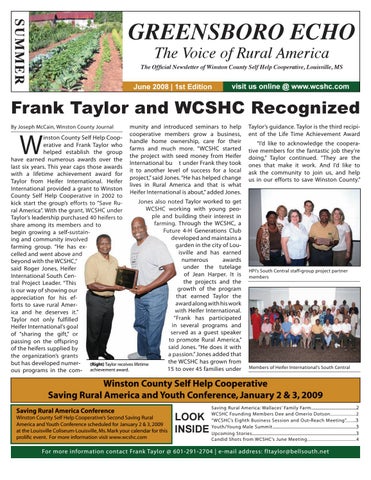 munity and introduced seminars to help cooperative members grow a business, handle home ownership, care for their farms and much more. “WCSHC started the project with seed money from Heifer International bu t under Frank they took it to another level of success for a local project,” said Jones. “He has helped change lives in Rural America and that is what Heifer International is about,” added Jones.

inston County Self Help Cooperative and Frank Taylor who helped establish the group have earned numerous awards over the last six years. This year caps those awards with a lifetime achievement award for Taylor from Heifer International. Heifer International provided a grant to Winston County Self Help Cooperative in 2002 to Jones also noted Taylor worked to get kick start the group’s efforts to “Save RuWCSHC working with young peoral America”. With the grant, WCSHC under ple and building their interest in Taylor’s leadership purchased 40 heifers to farming. Through the WCSHC, a share among its members and to Future 4-H Generations Club begin growing a self-sustaindeveloped and maintains a ing and community involved garden in the city of Loufarming group. “He has exisville and has earned celled and went above and numerous awards beyond with the WCSHC,” under the tutelage said Roger Jones, Heifer of Jean Harper. It is International South Centhe projects and the tral Project Leader. “This growth of the program is our way of showing our that earned Taylor the appreciation for his efaward along with his work forts to save rural Amerwith Heifer International. ica and he deserves it.” “Frank has participated Taylor not only fulfilled in several programs and Heifer International’s goal served as a guest speaker of “sharing the gift,” or to promote Rural America,” passing on the offspring said Jones. “He does it with of the heifers supplied by a passion.” Jones added that the organization’s grants the WCSHC has grown from but has developed numer(Right) Taylor receives lifetime 15 to over 45 families under ous programs in the com- achievement award.

Taylor’s guidance. Taylor is the third recipient of the Life Time Achievement Award “I’d like to acknowledge the cooperative members for the fantastic job they’re doing,” Taylor continued. “They are the ones that make it work. And I’d like to ask the community to join us, and help us in our efforts to save Winston County.”

December. The year-end meeting involves a dinner for spouses and guest. In addition, the membership elects officers and discuss next year’s activities. CCE membership increased by ten percent under Robert’s leadership…CCE members hails from Zachary, Baker, Baton Rouge, Kentwood, Amite and Folsom Parishes. Robert serves as vice president of Louisiana Brangus Association. The Wallaces attends the Church of the Burning Fire in Zachary and serves in several leadership capacities. 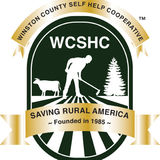