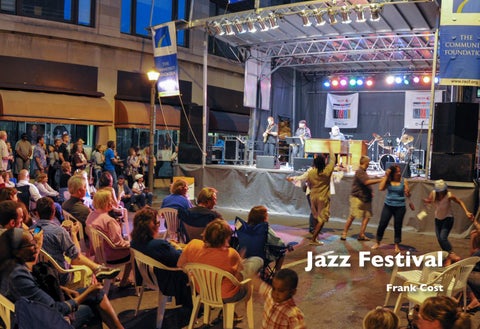 THESE PHOTOGRAPHS were made during the 2012 Rochester International Jazz Festival as part of a larger project to depict the 2012 Rochester festival season in a set of panoramic images. I have tried for years to capture my experience of the festivals in photographs. But the standard photographic frame, no matter how wide the lens, seems inadequate to the job. I am always aware that many things are happening simultaneously outside of the frame that may or may not be relevant to what is happening inside. The inspiration for these images came at the end of the winter of 2012. During the first two weeks of April, ten photographers from the Magnum Agency visited Rochester to photograph the city and surrounding community. The Magnum visit was part of an experimental project called “Postcards from America” that had begun the previous year with an extended trip by many of the same photographers across the Western U.S. While the goals of the photographers in the Rochester phase of the project (“House of Pictures”) were diverse, the project as a whole was intended to create an archive of images that would serve as a documentary record of life in Rochester at that particular moment in history. At the conclusion of the visit, a pop-up exhibition of images was displayed at the Rochester Visual Studies Workshop.These “House of Pictures” images reflected the signature styles of the photographers who took them. Overall, the Magnum collection painted a powerful and somewhat dark portrait of a city and culture in decline. The choice of early April for the visit meant that all of the photographs reflected the fatigue of people who had just endured nearly six months of cold weather, having all but lost hope that warm weather would ever return. If a photographer is inclined to create the darkest portrayal of life in Rochester possible, there is indeed no better time of year. My panoramic pictures of the 2012 Rochester festival season are intended to broaden and enrich the visual record of life in Rochester during the same year that marked the Magnum visit. One of the highest points of the season is the annual Xerox Rochester International Jazz Festival. The 2012 festival attracted nearly 200,000 people during its nine days of music and celebration in the heart of downtown. Frank Cost Rochester, New York February 2018