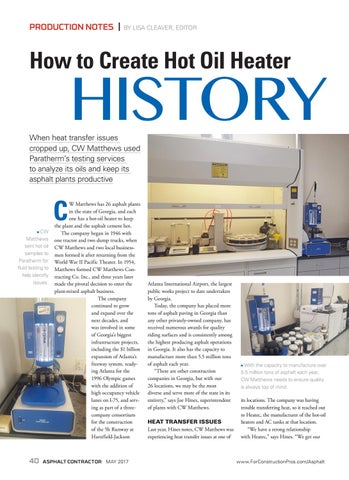 How to Create Hot Oil Heater

W Matthews has 26 asphalt plants in the state of Georgia, and each one has a hot-oil heater to keep the plant and the asphalt cement hot. The company began in 1946 with one tractor and two dump trucks, when CW Matthews and two local businessmen formed it after returning from the World War II Pacific Theater. In 1954, Matthews formed CW Matthews Contracting Co. Inc., and three years later made the pivotal decision to enter the plant-mixed asphalt business. The company continued to grow and expand over the next decades, and was involved in some of Georgia’s biggest infrastructure projects, including the $1 billion expansion of Atlanta’s freeway system, readying Atlanta for the 1996 Olympic games with the addition of high occupancy vehicle lanes on I-75, and serving as part of a threecompany consortium for the construction of the 5h Runway at Harstfield-Jackson

Atlanta International Airport, the largest public works project to date undertaken by Georgia. Today, the company has placed more tons of asphalt paving in Georgia than any other privately-owned company, has received numerous awards for quality riding surfaces and is consistently among the highest producing asphalt operations in Georgia. It also has the capacity to manufacture more than 5.5 million tons of asphalt each year. “There are other construction companies in Georgia, but with our 26 locations, we may be the most diverse and serve more of the state in its entirety,” says Joe Hines, superintendent of plants with CW Matthews. HEAT TRANSFER ISSUES Last year, Hines notes, CW Matthews was experiencing heat transfer issues at one of

With the capacity to manufacture over 5.5 million tons of asphalt each year, CW Matthews needs to ensure quality is always top of mind.

its locations. The company was having trouble transferring heat, so it reached out to Heatec, the manufacturer of the hot-oil heaters and AC tanks at that location. “We have a strong relationship with Heatec,” says Hines. “We get our

Asphalt Contractor provides HMA material producers, highway contractors and public works officials with critical "how-to" information on the process of HMA production, paving, and preservation. It also delivers the latest information and updates on equipment for the on-road paving industry. Asphalt Contractor is the only magazine that is dedicated to asphalt producers and contractors. 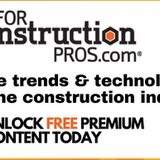