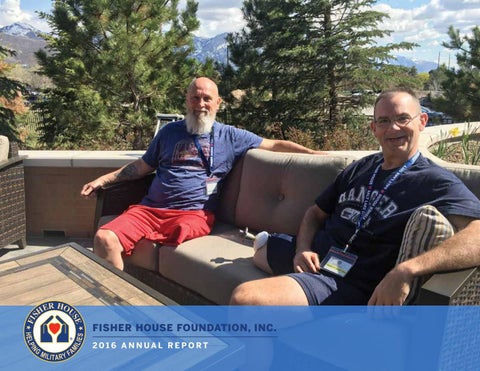 OUR MISSION Fisher House Foundation, Inc. is an international, not-for-profit organization established to improve the quality of life for members of the military, veterans and their families. The Foundation builds comfort homes at military and VA medical centers and gifts them to the government. Other Quality of Life programs include the Hero Miles and Hotels for Heroes programs, ongoing assistance to Fisher Houses, scholarships, support for continuing rehabilitation initiatives, and individual assistance to members of the military and their families during a crisis.

LETTER FROM KEN FISHER Dear Friends: I’d like to thank you for your support and generosity in 2016. Thanks to you, we were able to not only continue our mission, but expand our blessings to other quality of life programs for our service members, veterans and their families. In 2016, together we achieved the following: o Constructed our 71st Fisher House. o Provided our 7 millionth night of lodging. o Increased our daily Fisher House capacity to serve up to 950 families each night. o Provided over 5,000 flights to loved ones via our Hero Miles program. o Brought the Invictus Games to the United States, where the Foundation was a proud sponsor of the adaptive sporting event. I was also honored to serve as Chairman and CEO of Invictus Games Orlando. I am proud of the milestones we have achieved, and the progress we continue to make thanks to your support. My Uncle Zachary’s legacy of selfless giving will remain steadfast as we continue to support our greatest national treasure…our military service men and women and their loved ones. With heartfelt gratitude,

Ken Fisher poses with members of the USA wheelchair basketball team after they won the gold medal game during the Invictus Games in Orlando.

2016 IMPACT CONSTRUCTION The core of Fisher House Foundation’s mission is our network of homes for military and veterans’ families. In 2016

miles to bring loved ones to the bedside of

points to provide hotel rooms to families of the

wounded, injured and ill service members who are

with the nation’s radio stations. One of our four programs

when a Fisher House room is not available.

Day show for news/talk stations told the story of Medal of Honor recipient Florent Groberg, along with many other

mas programming with holiday songs and storytelling by host Garth Brooks and Trisha Yearwood. The estimated value of the donated airtime for all four shows was more than $4.7 million. NEWS STORIES More than 15,500 news stories mentioned Fisher House Foundation in 2016. There were more than 30.9 billion views by individuals. All coverage was positive.

Families served: 3,576 Fisher House was fortunate this year to partner with AARP

to share stories, both online and in the newsletter. AddiHOTEL PARTNERS:

tionally, Bill O’Reilly held an online auction for hats that

then President Elect Donald Trump had signed, resulting in

Disney World Resort. Ken Fisher was the Chairman and

the Warrior Games, a weeklong competition in which

500 athletes from 14 nations, and family and friends

members and veterans competed in Paralympic

who joined them to share in their recovery and

sports at the U.S. Military Academy at West Point.

Additionally, the Foundation provided Hero Miles flights to families of participating athletes, to ensure that they were able to attend the games. Fisher House is often present during a medical crisis, and we are

honored to help bring families together during their triumphs as well.

SCHOLARSHIPS In its 16th year, the Scholarships for Military Children Program awarded $1.4 million through 700 scholarships to sons and daughters of active, retired or reserve military members. The Heroes’ Legacy Program provided $1 million in grants to 200 children

Fisher House Foundation was a proud sponsor of the

contributed $200,000 to the National Military Family

ESPN’s Wide World of Sports Complex at the Walt

Association (NMFA) for scholarships to military spouses. In addition to our own scholarship programs, Fisher

$360 million+ Saved costs to families in lodging and transportation

Team USA athlete Ryan Pinney is surrounded by his family after track and field events during Invictus Games.

At Fisher House, we take pride in being fiscally

responsible with funds entrusted to us by thousands

of Honor recipients joined corporate VIPs on the golf

by the Honorable Sloan Gibson, Deputy Secretary of

received from organizations and 18% from in-kind

Veterans Affairs and was emceed by Fisher House

through the Golf Classic efforts. RADIOTHONS

moved thousands of listeners to donate by hosting

significant public awareness for the program.

Zachary and his wife, Elizabeth, were the founders of the Fisher House program. The Foundation would

like to recognize the many people and organizations that continue what Zachary and Elizabeth started by supporting our homes and programs during 2016. In addition to those listed, there were many more contributors who asked to remain anonymous—we send our heartfelt thanks to you, too.

For the 13th consecutive year, Fisher House Foundation was nationally recognized as a premier non-profit with a

four-star Charity Navigator rating, as well as a continued A+ from CharityWatch.

BOARD OF TRUSTEES FOUNDERS