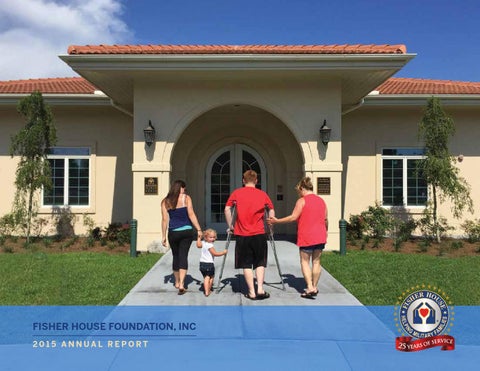 OUR MISSION Fisher House Foundation, Inc. is an international not-for-profit organization established to improve the quality of life for members of the military, retirees, Veterans and their families. The Foundation builds comfort homes at military and VA medical centers and gifts them to the government. It assists with the coordination of private support and encourages public support for the network of comfort homes known as â&#x20AC;&#x153;Zachary and Elizabeth M. Fisher Houses.â&#x20AC;? It works to educate and inform the military and Veteransâ&#x20AC;&#x2122; communities, their families and the general public about Fisher Houses and provides necessary support to individual Fisher Houses as needed. Other quality of life programs include scholarship programs, a grants program for volunteer organizations with innovative plans for quality of life projects, the Hero Miles and Hotels for Heroes programs and individual assistance to members of the military and their families during a crisis.

CELEBRATING 25 YEARS OF SERVICE Dear Friends: 2015 marked the 25th Anniversary for Fisher House and I’m excited to share this milestone in our Annual Report with so many people who have supported the mission and efforts of this great organization. I am inspired by my great Uncle Zachary’s legacy: selfless giving and stepping up to solve a problem. What he started—and, together, what we’ve built—is a nationally lauded public-private partnership, accomplishing some pretty amazing things. Since the program began, we have achieved these milestones: o Constructed our 67th Fisher House o Saved families more than $320 million in lodging and transportation costs o Provided more than 6 million nights of lodging o Flew more than 60,000 wounded, injured and ill service members and their families o Provided more than $15 million in scholarships In 2015, we re-engaged more than 10,000 lapsed donors and introduced Zach’s Club for monthly recurring donors, along with Elizabeth’s Circle for those who give at least $25,000. I don’t know if Zachary and Elizabeth could have truly foreseen the impact of their vision, but I am certain they would be proud of where we’ve taken it. Our mission is far from over, and I look forward to even greater things in the next 25 years. With heartfelt gratitude,

2015 IMPACT CONSTRUCTION The core of Fisher House Foundationâ&#x20AC;&#x2122;s mission is our homes for military and Veteran families. In 2015, we

$44 million+ Saved to families in lodging and transportation costs

points to provide hotel rooms to families of the

and/or their families. Flights are made possible

through the generosity of the American public who

who are undergoing treatment at authorized medical

centers when a Fisher House room is not available.

members and Veterans competed in paralympic

sports at the Quantico Marine Corps Base, VA. AIRLINE PARTNERS:

Additionally, we provided Hero Miles flights to families of participating athletes to ensure they were able to attend the games and cheer on their loved ones.

In its 15th year, the Scholarships for Military Children

Program awarded 700 scholarships to sons and

Legacy Program provided $5,000 grants to 146 children of service members killed or severely disabled since September 11th, 2001, for a total of $730,000 in scholarship grants. Additionally, Fisher House Foundation contributed $150,000 to the National Military Family Association (NMFA) for scholarships to military spouses.

nerships with the nationâ&#x20AC;&#x2122;s radio stations. Created in-house, Fisher House Foundationâ&#x20AC;&#x2122;s Memorial Day show for news/talk stations told the story of Medal of Honor recipient Kyle Carpenter, along with many others, and aired on 150 stations. Meanwhile, more than 100 leading country stations and iHeartRadio ran holiday programming and storytelling by host Charlie Daniels. The estimated value of the donated airtime

was more than $3.5 million. HISTORY BOOK In commemoration of the 25th Anniversary of the

Fisher House program, the Foundation published a history book to share the rich past of the Fisher family, the Foundation and the many families who have benefitted from Fisher Houses. NEWS STORIES Last year there were more than 12,300 news stories

$2.3 million In scholarships to military and Veterans families

Purple Heart recipient Dale Beatty and his wife, Belinda, talk about the pivotal role Fisher House played in their lives at the 25th Anniversary Celebration.

Twice a year, the Patriot Magazine is written and sent to people who sign up for it, as well as posted on the Web. Special thanks to Don Schaaf &Friends, Inc. and Linemark Printing, Inc. for your reduced rates and continued support.

At Fisher House, we take pride in being fiscally respon-

sible with funds entrusted to us by thousands of

in early May and culminated with the 25th Anniversary

dation’s total revenue came from individual gifts by the

military and corporate VIPs on the golf course and at

total at the Marine Corps

included special remarks by Vice Chairman of the

Foundation at the People’s Marathon in Arlington, VA.

Defense Ashton B. Carter delivered the special remarks at the Anniversary Celebration event. Both events were emceed by CNN Correspondent Kyra Phillips.

Organizational support made up 36% of total giving, including in-kind donations of $14 million from travel industry partners, free advertising and free radio airtime. Additionally, more than $1.5 million was raised by individuals who hosted proud supporter events.

More than $7 million was raised through the 25th Anniversary efforts.

Elizabeth and Zachary Fisher are the founders of the Fisher House program. Individuals and organizations who made gifts of $25,000 or more in 2015 are members of Elizabeth’s Circle and recognized on these pages. Because of the generosity of so many who make gifts both large and small, Fisher House continues to serve more families each year. Gifts in all amounts are sincerely appreciated and we would like to extend our gratitude to all our supporters. Photo above was taken when Elizabeth was performing with the USO in Italy during WWII.

For the 12th consecutive year, Fisher House Foundation was nationally recognized as a premier non-profit with a

four-star Charity Navigator rating, as well as a continued A+ from CharityWatch.

BOARD OF TRUSTEES FOUNDERS