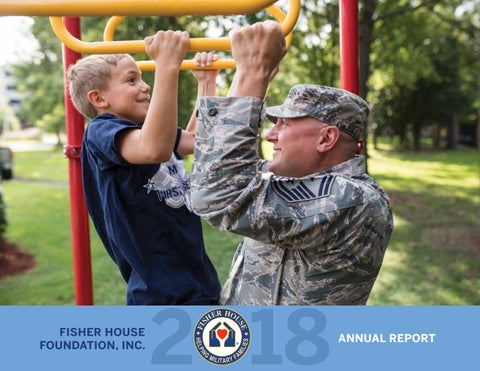 LETTER FROM KEN FISHER Dear Friends: I am so proud of what we have accomplished together. Thanks to your support, by the end of 2018, Fisher House has opened 79 Fisher Houses and provided more than 8.7 million nights of lodging for more than 368,000 military and veterans’ families. In fact, on any given night up to 1,080 families

could be staying at a Fisher House.

improve the quality of life for members of the military, retirees, veterans and their families.

Behind these numbers, however, are thousands of individual stories. When a family member tells me

Our Hero Miles program has provided more than 74,000 airline tickets since it began in 2004, and

that being near her husband saved his life and she could never have done that without a Fisher House,

I am touched beyond words.

to the government. It assists with the coordination of private support and encourages

Of course, Fisher House Foundation didn’t do it alone. Through the years, hundreds of thousands of

individuals, companies, foundations and NGOs have contributed to making these dreams possible. Whether it’s donating airlines miles, volunteer hours, or funds, I’m honored to lead an organization Ken Fisher’s family joins in the groundbreaking for the two new Fisher Houses at the Bronx VA.

whose success has been a unified effort of the American people. In fact, there are few things in my life that bring me more pride and satisfaction than Fisher House Foundation. I know I speak for everyone at Fisher House when I say we will be here for as long as it takes. We will find and devote the resources given to us to get the job done. Why? Because today’s military and their families have rekindled love of country, true patriotism and respect for citizen

service. It is the very least we can do for them.

military and their families during a crisis.

I thank you for helping make this possible. Because of you, we’ll continue our mission—together. With heartfelt gratitude,

points and funds to provide hotel rooms to families

ones to the bedside of wounded, injured and ill

who are undergoing treatment at authorized medical

centers when a Fisher House room is not available.

and country stations tell stories about families who have stayed at Fisher Houses and about people who support the organization. More than 400 leading country and talk radio

stations ran the shows. Donated airtime for the shows and public service announcements (PSAs) was valued at more than $4 million.

Cost savings to families: $609,676 SINCE PROGRAM INCEPTION IN 2004: Dignitaries gather for the ribbon cutting at the Dayton Fisher House.

CONSTRUCTION Construction is ongoing for homes at:

our homes for military and veteran families. In 2018,

At the heart of Fisher House Foundation’s mission are we opened Fisher Houses at the following locations:

Housekeeping, and Associate Press, to name just a few.

The power of storytelling also has an impact on the Foundation’s bottom line.

Fisher House Foundation has a strong social media and web presence. On Facebook, for example, the Foundation has 133,000 followers, and, in 2018, more than 400 fundraisers brought in $242,000. The website remains our strongest outreach platform, with more than 22,000

Saved costs to families in lodging and transportation

people visiting fisherhouse.org each month. More than 2/3 of donations made to Fisher House Foundation are made through the website.

At Fisher House, we strive to maintain the highest

Since the inception of the Invictus Games in 2014,

financial responsibility to the thousands of donors

the Warrior Games, a weeklong competition where

Fisher House Foundation has been a major supporter

who support us each year. For the 14th consecutive

of the event. Most importantly, Fisher House has

engaged thousands of new donors. This year the

year, the Foundation received a four-star rating from

played a critical role in the Family and Friends Program,

ensuring that the families of our U.S. athletes could be

evaluator of charities. The Foundation also holds an

there to cheer on their injured or ill service members.

A+ rating from charitywatch.org, an online charity

Invictus Games Sydney 2018 in Australia was no

Sydney and supplied them with shirts, backpacks, hats

and other gear. The Invictus Games is an international

Medal of Honor recipients joined corporate VIPs on the

military and veterans. The 2018 Games featured 500

athletes from 18 nations who competed in 13 different

provided Hero Miles flights to families of participating athletes, to ensure they were able to attend the games. Fisher House is often present during a medical crisis, and we are honored to help bring families together during the triumphs as well.

by The Honorable Robert Wilkie, Acting Secretary of

SCHOLARSHIPS In its 18th year, the Scholarships for Military Children

(NMFA) to provide scholarships to military spouses. In

Program awarded 700 scholarships to sons and

addition to its own scholarship programs, Fisher House

the Department of Veteran Affairs and was emceed by Fisher House board of trustee and ABC News correspondent, Kyra Phillips and FOX News Chief

$300,000 to the National Military Family Association

of Philanthropy. Additionally, the Foundation holds

$451 million Saved costs to families in lodging and transportation

Zachary Fisher and his wife, Elizabeth, are the founders of the Fisher House program. In the early years, Elizabeth and Zachary personally funded the first houses. Fisher House Foundation proudly recognizes the individuals and organizations who help to continue Zachary and Elizabeth’s legacy, including those listed on these pages, and the thousands more who gave in 2018. Thank you to our 2,260 members of Zach’s Club, too. Your monthly gifts help Fisher House expand programs to our military, veterans and their families.

Loss on disposal of fixed assets

FOUNDATION LEADERSHIP For the 14th consecutive year, Fisher House Foundation was nationally recognized as a premier nonprofit with a

★★★★ Charity Navigator rating, as well as a continued A+ from CharityWatch. 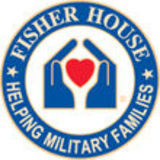