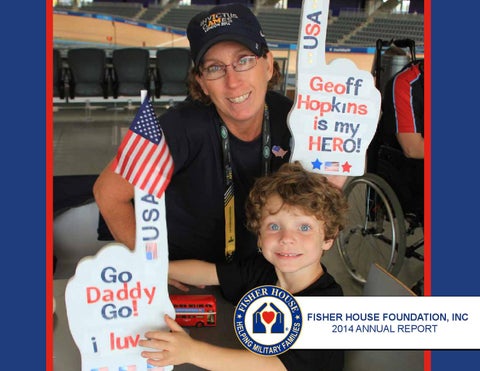 OUR MISSION Fisher House Foundation, Inc. is an international not-for-profit organization established to improve the quality of life for members of the military, retirees, Veterans and their families. The Foundation builds comfort homes at military and VA medical centers and gifts them to the government. It assists with the coordination of private support and encourages public support for the network of comfort homes known as “Zachary and Elizabeth M. Fisher Houses.” It works to educate and inform the military and Veterans’ communities, their families and the general public about Fisher Houses and provides necessary support to individual Fisher Houses as needed. Other Quality of Life programs include scholarship programs, a grants program for volunteer organizations with innovative plans for quality of life projects, the “Hero Miles” and “Hotels for Heroes” programs and individual assistance to members of the military and their families during a crisis.

LETTER FROM KENNETH FISHER Dear Friends: The quality of the Fisher House experience is important to all of us. Just as the quality matters in each home we build, it also matters in the work we do to support those homes every day. And I’m proud to say, our 2014 Annual Report reflects that quality. •

On any given night Fisher House can provide a safe haven for more than 830 families.

Our Hero Miles program, which at the end of 2014 had purchased some 56,000 tickets, saved families an estimated $88 million, since inception.

We increased scholarships to $1.8 million, with half a million in scholarships going to the children of the fallen and disabled.

Fisher House was the only American sponsor of the international Invictus Games.

I am privileged to be part of such a great organization, and I want to thank those who continue to support our vital initiatives. Rarely does a week go by when I am not uplifted by a letter, an email, or a story filled with heartfelt thanks from the parents, spouses and children who are a critical part of the healing process of our wounded, injured or ill service members and Veterans. With heartfelt gratitude,

IS THE AVERAGE STAY FOR COMBAT CASUALITIES

IS THE AVERAGE LENGTH OF STAY

$35 MILLION SAVED IN LODGING AND TRANSPORTATION COSTS TO FAMILIES

IN LODGING AND TRANSPORTATION COSTS

The Hero Miles program uses donated airline flyer miles to bring loved ones to the bedside of wounded, injured or ill service members. • 9,711 tickets in 2014 • Savings to the families: over $15 million

The Hotels for Heroes program uses donated hotel points to provide hotel rooms to families of the wounded, injured or ill military service members who are undergoing treatment at authorized medical centers when a Fisher House room is not available. • 1,942 free nights of stay in 2014 • Savings to families: over $300,000

For the fourth year, Fisher House Foundation supported the Warrior Games, a week-long competition where more than 200 wounded, injured or ill service members and Veterans competed in paralympic sports at the US Olympic Training Center in Colorado Springs. To ensure they were able to support their loved ones, Fisher House provided flights to the families of participating athletes.

In its 14th year, the Scholarships for Military Children Program awarded 600 scholarships of $2,000 each to sons and daughters of active, retired or reserve military members, for a total of $1.2 million. The Heroes’ Legacy Scholarships program provided $5,000 grants to 108 children of service members killed or severely disabled since Sept. 11, 2001, for a total of $540,000 in scholarship grants. Additionally, Fisher House Foundation contributed $100,000 to the Joanne Holbrook Patton Scholarship for military spouses.

Fisher House Foundation maintains a powerful partnership with the nation’s radio stations. Our three-hour Memorial Day 2014 news/ talk show aired on 140 stations, as well as online and via apps like iHeartRadio. The Holiday 2014 country show attracted Garth Brooks as host. The estimated air value of Fisher House’s 3-hour radio programming in 2014 was $1.6 million. Radio audiences also discover Fisher House through year-round interviews on local and syndicated shows, as well as widely-aired public service announcements. This year, Fisher House Foundation was presented with three Hermes Creative Awards, an international competition for creative professionals. Awards were given for The Patriot magazine and for the Public Service Announcement titled, “A Hero’s Story.” We could not win these awards without gracious support from Don Schaaf and Friends who help design the magazine, which received two of the three awards, and from David Freed, a Hollywood producer and his team for creating a captivating Public Service Announcement.

OUR SUPPORTERS At Fisher House, we take pride in being fiscally responsible with funds entrusted to us by thousands of individuals and organizations each year.

Organizational support in 2014 accounted for 48% of total giving, including over $15 million of in-kind donations from travel industry partners and over $900,000 from cause-related marketing efforts from a variety of businesses.

REVENUE & EXPENSES JANUARY 1, 2014 - DECEMBER 31, 2014 In 2014, for the 10th consecutive year, Fisher House Foundation was nationally recognized as a premier nonprofit with a four-star Charity Navigator rating, as well as a continued A+ from CharityWatch.

Net assets at the beginning of the year

NET ASSETS AT THE END OF THE YEAR

Because of the generosity of so many who make gifts both large and small, Fisher House continues to serve more families each year. Gifts in all amounts are sincerely appreciated and we would like to extend our gratitude to all of our generous supporters. 10