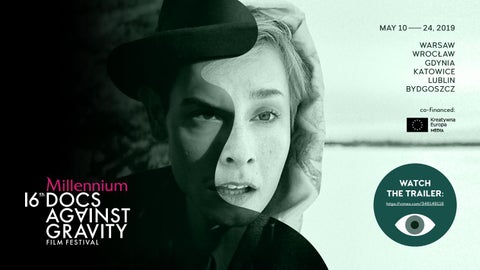 In Warsaw film screenings and associated events were attended by a total of 58,089 people (over 46% more festival goers than last year). GDYNIA

Lublin: 776 people (25% growth) The first edition of the festival in Katowice was attended by 3,923 viewers. Festival screenings were also held in 15 other cities all over Poland, and they were attended by 1,519 viewers.

The schedule of the 16th Millennium Docs Against Gravity Film Festival included over 102 associated events in all cities. Multiple Q&amp;A’s with filmmakers and film protagonists (a total of 49 foreign and 31 Polish guests) were held during the festival.

Numerous guests from abroad accepted our invitation, including Letizia Battaglia and Roberto Timperi, the protagonists of Kim Longinotto’s Shooting the Mafia. André Singer, co-director and producer of Meeting Gorbachev (co-directed with Werner Herzog), met with our audiences. Roberto Minervini, one of the most interesting contemporary directors portraying the melting-pot reality of the US, held a master class at the Festival.

Benedetta Barzini, another guest of the festival is one of the first Italian top models and the star of her son Beniamino Barrese’s The Disappearance of My Mother. Doris Wagner, the protagonist of Barbara Miller’s #Female Pleasure, spoke at MDAG as well. Festival attendees also had the opportunity to meet with several masters of documentary filmmaking long associated with MDAG: Vitaly Mansky, Mads Brügger and Sergei Loznitsa.

Q&amp;A’s with artists, debates, workshops and music events Debate co-organised with Amnesty International after the screening of “The Trial of Ratko Mladić”

Festival attendees participated in workshops for adults, e.g. “Memory exercises” linked with the screening of Memory Games by Janet Tobias and Claus Wehlisch. Similarly, our youngest viewers had numerous opportunities to take part in debates and workshops, like “Discussion: What happened in Poland in ‘89?” following the the screening of Michał Bielawski’s 1989.

Music events – closely modeled after various films screened at the festival – proved wildly popular. At the Britpop Brexit Silent Disco held on May 10 at the Kulturalna club in Warsaw, you could tune in to hits from a particular decade on every channel. The event followed the premiere screening of My Generation, where Sir Michael Caine guides us through Swinging Sixties’ London. Antoha MC, considered one of the biggest emerging stars on the Russian music scene, gave two concerts – on May 18 and 19, also in Kulturalna. One of his songs served as the coda to Transnistra, a film entered in the Main Contest for the Grand Prix – Millennium Bank Award.

The award in the Main Contest was funded by the Patron of the Festival: Millennium Bank.

The award was funded by Amnesty International Polska.

The National Geographic Award for Best Cinematography and 2,000 euro winner:

The award was funded by the National Geographic Polska magazine.

The award was funded by the City of Warsaw.

Co Jest Grane 24 magazine is the patron of this award.

“Zwierciadło” Award for the Best Film on Psychology and 1,000 euro

The Chopin’s Nose Award was funded by the National Film Archive – Audiovisual Institute.

Where We Belong, dir. Jacqueline Zünd

Zwierciadło magazine is the patron of this award.

The award was funded by the City of Warsaw.

Everyone and everything were great! Thank you very much, beautiful people!

And once more; thank you for a wonderful festival. You guys are the best

You guys did a truly fantastic job in every area. It was extremely helpful to have volunteers welcoming and escorting us filmmakers. The screening rooms are wonderful, and the translator I had on my last screening was world-class, among the best I have ever had in my career. The buffet dinners are nice, and so are the parties/social events.

Roberto Minervini („What You Gonna Do When The World Is On Fire?”)

The festival was wonderful, and everything was very well taken care of. It was all generous, great consideration and care of guests, wonderful audiences and great theatre, lovely hotel, and a warm welcome. I hope I can come back again.

“ The days with Against Gravity were purely perfect. The attention given to us could not have been more warm and wonderful. I was unfortunately not feeling too well so I missed out on many interesting moments, but I shall keep memory of every single minute in Warsaw looking at everything that I could not see…and feeling inside me the weight of history that modernity tries to erase. To you, to all the wonderful people that worked in your festival, my love.

I have told many people here how impressed I was with all aspects of the festival, from the outstanding level of organization to the venues, the caliber of the selections, the sincerity and sophistication of audience question and most of all the extraordinary people responsible for the festival. As you know, it was quite remarkable and emotional for me to visit Warsaw in such a context and all aspects of the festival added to those special days in a positive way. Thank you so much for making this possible and for all your efforts and many courtesies along the way.

(„The Disappearance of My Mother”)

(„The Trial of Ratko Mladić”)