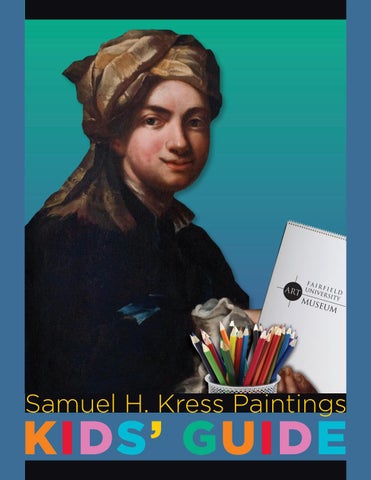 WHAT’S A KRESS PAINTING? The 10 Kress paintings at Fairfield University Art Museum were the first artworks we ever owned! In the early 1900s, these paintings belonged to a man named Samuel H. Kress. Mr. Kress made a lot of money with a chain of five-and-dime stores (kind of like dollar stores today), and loved to collect art. He owned more than 3,000 paintings and sculptures!

Sketch! There’s a space in this guide to draw your favorite piece

Look closely! Can you spot any small details?

Pose! Can you imitate the poses you see?

Ask! What do you want to know more about?

Here are some more tips: • Take as many photos as you want! Please make sure the flash is off on your phone or camera (bright lights hurt the art). • Be careful not to touch. This keeps our art (and you) safe. • Please don’t eat or drink in the galleries! This helps keep out bugs and makes sure our art is never accidentally splashed. • Please don’t run in the galleries! • Most important: Have fun!

SCAVENGER HUNT These DETAILS are hiding in our Kress paintings. Can you find them?

Can you draw your own self-portrait in the space below?

Fun Fact The label on the frame has a different artist’s name, Fra Ghislandi. That’s because when Mr. Kress bought it, art historians thought that’s who painted it. They only figured out it was Martin in 2010!

CHRISTIANITY IN ART Most of the art made in Europe between 1350 and 1800 was religious art. This meant it depicted subjects from Christianity, which was the most widespread (though not the only) religion at the time. Patrons, the people who commissioned (ordered and paid for) paintings or sculptures, often asked artists to create works that show people or stories from the Bible. The patrons and their families could look at the pictures, think about the important stories or religious figures, and pray. One of the most popular subjects was the Madonna and Child. We have two paintings of the Madonna (or Virgin Mary), the mother of Jesus, with Jesus as a baby or young child:

A BUSY NATIVITY The Nativity refers to a Christian story about the birth of Jesus. Mary and her husband Joseph were on a long trip when she realized she was about to have her baby. They were in a town called Bethlehem, but all the inns were full. Mary gave birth to Jesus in a stable. Later, some shepherds and wise men came to give her and baby Jesus presents to celebrate his birth. Can you find a depiction of this story in our gallery?

In one of these paintings, Mary and the baby Jesus both have haloes. A halo is a circle or disk, usually of gold, that appears around the head of important religious figures in artworks. How many haloes can you find in the paintings at Fairfield?

ALTARPIECES An altarpiece is a work of art that is placed behind an altar in a Christian church. The altar is the main focus of a church and where the priest stands for the service. Between around 1300 and 1500, altarpieces were often polyptychs, or paintings made up of many small panels, like this one:

There was usually a larger central panel showing the Madonna and Child, and smaller panels on the sides with different saints. There are two Kress paintings that art historians believe were once part of much larger polyptychs:

These two paintings each show a saint who can be identified because of their attributes, or the objects that they are holding. One is St. Andrew, who carries an x-shaped cross, and the other is St. Anthony Abbot, who has a walking stick that has a T-shape at the top, which is called a Tau Cross. If you were filling in this polyptych, what other people might you include?

Why do we only have a few pieces of an altarpiece? If a church decides to remove or replace an altarpiece, the old one was often sold. Art dealers would take apart polyptychs and sell individual panels. There are actually six other panels in museums and private collections in Europe that are from the same altarpiece as the two paintings here at Fairfield!

CASSONE Have you ever been to a wedding? Ask an adult what they might give as a nice wedding gift! If they lived in Italy during the Renaissance (1400-1600), they might have given a new bride a pair of cassoni (singular: cassone), a wedding chest, like this one. They were filled with objects that the woman could use in her new home, like tablecloths, napkins, and clothing.

THE MYSTERY CONTINUESâ&amp;#x20AC;Ś The Philadelphia Museum of Art has another painting from the same cassone in its collection:

Does that give you any clues?

GREEK MYTHS Artists working in Europe in the Renaissance and Baroque periods would often portray stories from ancient Greek mythology. These stories of gods, heroes, and monsters were written thousands of years ago and, for ancient Greek people, helped explain how the world worked. This painting is a scene from the story of Perseus and Andromeda. Perseus was a hero who defeated the monster Medusa, who had snakes instead of hair and who could turn anyone who looked at her into stone. When Perseus killed Medusa, Pegasus, a winged horse, sprang from her dead body. Perseus then hopped on Pegasus and while flying home, saw the princess Andromeda chained to a rock. Can you find Perseus in this painting? Andromedaâ&amp;#x20AC;&amp;#x2122;s mother had made Poseidon, the god of the oceans, angry, and as punishment, he sent a sea monster to attack the city. Andromedaâ&amp;#x20AC;&amp;#x2122;s parents thought that the only way to stop the monster was to sacrifice their daughter. What do you think is going to happen next? ____________________________________ In the space below, draw your own sea monster!

Fun Fact You can see other stories from Greek mythology here at Fairfield. In the hallway outside the gallery, there are plaster casts of ancient Greek sculptures that show a number of people from Greek mythology, including gods and monsters like centaurs (half man and half horse).

This Kids’ Guide was prepared by Sarah Cantor, the 2018-2019 Kress Interpretive Fellow at the Fairfield University Art Museum, and Michelle DiMarzo, Curator of Education and Academic Engagement. The publication was made possible by a generous grant from the Samuel H. Kress Foundation. 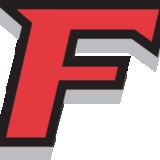