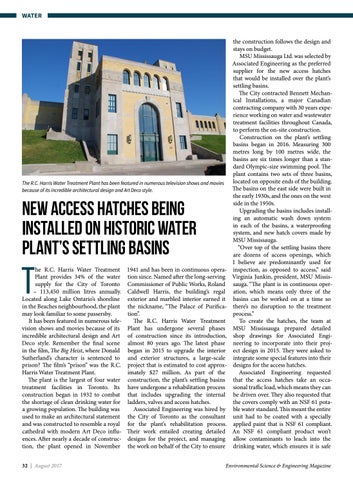 The R.C. Harris Water Treatment Plant has been featured in numerous television shows and movies because of its incredible architectural design and Art Deco style.

he R.C. Harris Water Treatment Plant provides 34% of the water supply for the City of Toronto – 113,450 million litres annually. Located along Lake Ontario’s shoreline in the Beaches neighbourhood, the plant may look familiar to some passersby. It has been featured in numerous television shows and movies because of its incredible architectural design and Art Deco style. Remember the final scene in the film, The Big Heist, where Donald Sutherland’s character is sentenced to prison? The film’s “prison” was the R.C. Harris Water Treatment Plant. The plant is the largest of four water treatment facilities in Toronto. Its construction began in 1932 to combat the shortage of clean drinking water for a growing population. The building was used to make an architectural statement and was constructed to resemble a royal cathedral with modern Art Deco influences. After nearly a decade of construction, the plant opened in November 32  |  August 2017

1941 and has been in continuous operation since. Named after the long-serving Commissioner of Public Works, Roland Caldwell Harris, the building’s regal exterior and marbled interior earned it the nickname, “The Palace of Purification”. The R.C. Harris Water Treatment Plant has undergone several phases of construction since its introduction, almost 80 years ago. The latest phase began in 2015 to upgrade the interior and exterior structures, a large-scale project that is estimated to cost approximately $27 million. As part of the construction, the plant’s settling basins have undergone a rehabilitation process that includes upgrading the internal ladders, valves and access hatches. Associated Engineering was hired by the City of Toronto as the consultant for the plant’s rehabilitation process. Their work entailed creating detailed designs for the project, and managing the work on behalf of the City to ensure

the construction follows the design and stays on budget. MSU Mississauga Ltd. was selected by Associated Engineering as the preferred supplier for the new access hatches that would be installed over the plant’s settling basins. The City contracted Bennett Mechanical Installations, a major Canadian contracting company with 30 years experience working on water and wastewater treatment facilities throughout Canada, to perform the on-site construction. Construction on the plant’s settling basins began in 2016. Measuring 300 metres long by 100 metres wide, the basins are six times longer than a standard Olympic-size swimming pool. The plant contains two sets of three basins, located on opposite ends of the building. The basins on the east side were built in the early 1930s, and the ones on the west side in the 1950s. Upgrading the basins includes installing an automatic wash down system in each of the basins, a waterproofing system, and new hatch covers made by MSU Mississauga. “Over top of the settling basins there are dozens of access openings, which I believe are predominantly used for inspection, as opposed to access,” said Virginia Junkin, president, MSU Mississauga. “The plant is in continuous operation, which means only three of the basins can be worked on at a time so there’s no disruption to the treatment process.” To create the hatches, the team at MSU Mississauga prepared detailed shop drawings for Associated Engineering to incorporate into their project design in 2015. They were asked to integrate some special features into their designs for the access hatches. Associated Engineering requested that the access hatches take an occasional traffic load, which means they can be driven over. They also requested that the covers comply with an NSF 61 potable water standard. This meant the entire unit had to be coated with a specially applied paint that is NSF 61 compliant. An NSF 61 compliant product won’t allow contaminants to leach into the drinking water, which ensures it is safe 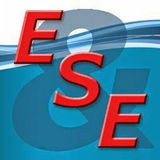