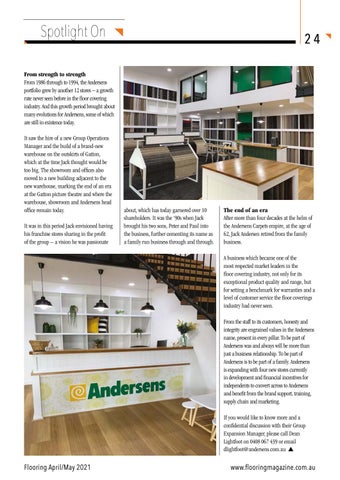 From strength to strength From 1986 through to 1994, the Andersens portfolio grew by another 12 stores – a growth rate never seen before in the floor covering industry. And this growth period brought about many evolutions for Andersens, some of which are still in existence today. It saw the hire of a new Group Operations Manager and the build of a brand-new warehouse on the outskirts of Gatton, which at the time Jack thought would be too big. The showroom and offices also moved to a new building adjacent to the new warehouse, marking the end of an era at the Gatton picture theatre and where the warehouse, showroom and Andersens head office remain today. It was in this period Jack envisioned having his franchise stores sharing in the profit of the group – a vision he was passionate

about, which has today garnered over 10 shareholders. It was the ‘90s when Jack brought his two sons, Peter and Paul into the business, further cementing its name as a family run business through and through.

The end of an era After more than four decades at the helm of the Andersens Carpets empire, at the age of 62, Jack Andersen retired from the family business. A business which became one of the most respected market leaders in the floor covering industry, not only for its exceptional product quality and range, but for setting a benchmark for warranties and a level of customer service the floor coverings industry had never seen. From the staff to its customers, honesty and integrity are engrained values in the Andersens name, present in every pillar. To be part of Andersens was and always will be more than just a business relationship. To be part of Andersens is to be part of a family. Andersens is expanding with four new stores currently in development and financial incentives for independents to convert across to Andersens and benefit from the brand support, training, supply chain and marketing. If you would like to know more and a confidential discussion with their Group Expansion Manager, please call Dean Lightfoot on 0408 067 439 or email dlightfoot@andersens.com.au

The only trade publication dedicated to the domestic & commercial flooring and floorcovering industries and allied trades in Australia and New Zealand. Established in 1981. 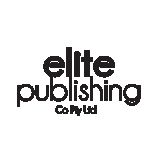