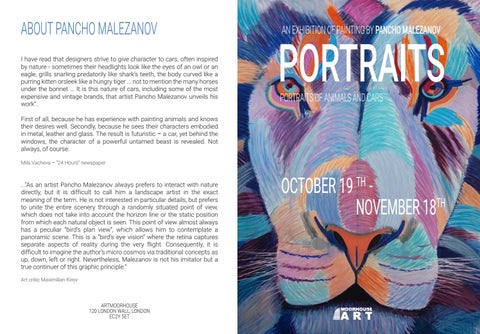 ABOUT PANCHO MALEZANOV I have read that designers strive to give character to cars, often inspired by nature - sometimes their headlights look like the eyes of an owl or an eagle, grills snarling predatorily like shark’s teeth, the body curved like a purring kitten orsleek like a hungry tiger ... not to mention the many horses under the bonnet ... It is this nature of cars, including some of the most expensive and vintage brands, that artist Pancho Malezanov unveils his work”.

AN EXHIBITION OF PAINTING BY PANCHO MALEZANOV

PORTRAITS PORTRAITS OF ANIMALS AND CARS

First of all, because he has experience with painting animals and knows their desires well. Secondly, because he sees their characters embodied in metal, leather and glass. The result is futuristic – a car, yet behind the windows, the character of a powerful untamed beast is revealed. Not always, of course. Mila Vacheva – &quot;24 Hours&quot; newspaper

...&quot;As an artist Pancho Malezanov always prefers to interact with nature directly, but it is difficult to call him a landscape artist in the exact meaning of the term. He is not interested in particular details, but prefers to unite the entire scenery through a randomly situated point of view, which does not take into account the horizon line or the static position from which each natural object is seen. This point of view almost always has a peculiar “bird’s plan view”, which allows him to contemplate a panoramic scene. This is a “bird’s eye vision” where the retina captures separate aspects of reality during the very flight. Consequently, it is difficult to imagine the author’s micro cosmos via traditional concepts as up, down, left or right. Nevertheless, Malezanov is not his imitator but a true continuer of this graphic principle.&quot; Art critic Maximilian Kirov 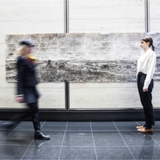