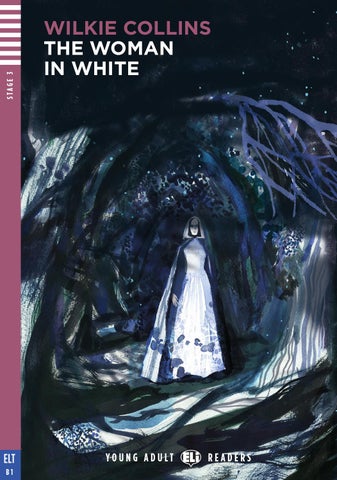 The Woman in White

THE WOMAN IN WHITE

The Woman in White is the first English ‘sensation novel’ full of mystery and dark secrets. After meeting a strange woman one night in London, Walter Hartright begins to realise that this mysterious woman is connected, in some way, to his new life at Limmeridge House and the woman he loves, Laura Fairlie. The story is told through different characters, and soon we find Walter, Marian and Laura caught up in a frightening world of crime, madness and mistaken identity. Count Fosco with Sir Percival Glyde, will do anything to get their hands on Laura’s money and think up a terrible crime that could destroy her life forever.

Eli Readers is a beautifully illustrated series of timeless classics and specially written stories for learners of English.

WILKIE COLLINS THE WOMAN IN WHITE

In this reader you will find: – Information about Wilkie Collins – CLIL History: Women in the Victorian Age – Glossary of difficult words – Comprehension and extension activities, including Preliminary (PET) activities – Exit test Tags Secrets

Sometimes the police don’t always discover crimes. The story of this crime is told for the first time in these pages. Walter Hartright, twenty-eight years old and a drawing teacher, will begin the story. It was the last day of July. After a long hot summer, I found myself in London with no job and no money. One evening I went to visit my sister and mother in Hampstead. My old Italian friend, Mr Pesca was there too. He had left Italy many years ago and now taught languages in London. I had saved his life once in the sea at Brighton a long time ago, and we had become great friends. ‘I’ve found you a job in a rich country house,’ said Mr Pesca. ‘You’ll teach two lovely ladies how to draw.’ I’d work for a rich businessman, Frederick Fairlie of Limmeridge House, Cumberland. He wanted me to start immediately. I thanked my dear friend and spent the rest of the evening with him and my family. It was almost midnight when I started walking back to my flat in London. I was enjoying the peace and quiet of that warm night when suddenly my heart almost stopped – somebody had touched me on

Choose the correct answer, A, B or C about Chapter Eight.

Count Fosco had decided to stay in London A until the end of June. B until the end of July. C until the end of August. 1 In his letter, Major Donthorne said A Sir Percival Glyde had been his friend. B Sir Percival Glyde had never stayed at his home. C Sir Percival Glyde had written him lots of letters. 2 Mr Philip Fairlie had stayed at Varneck Hall A from June 1826 to October 1826. B from August 1826 to June 1827. C from August 1826 to October 1826. 3 Sir Percival had A saved all Laura’s money. B spent all Laura’s money. C given all Laura’s money to the Count. 4 Mr Pesca saw the Count A at home. B in the street. C at the theatre. 5 When Walter arrived at Fosco’s house, the Count was A talking to his lawyer. B playing with his mice. C getting ready to leave. 6 When the Count got Pesca’s letter, A he burnt it. B he took it with him. C he gave it to his wife. 7 Fosco was killed by A Walter Hartright. B the stranger at the theatre. C Mr Pesca.

Write about Marian, Laura, Anne Catherick, Mrs Catherick and Madame Fosco. Talk about: - their character - how important they are for the story - what you liked or didn’t like about them.

All these words are in the glossary. How many of them can you remember? Match each word to the correct definition.

not strong, easy to break. hospital for the care of mentally ill people. say something is true. a person, who by law, takes care of a young person. land and buildings that belong to a person. give information about somebody to an enemy. a person who listens and watches in secret. not happy, worried. money you must pay to others.

and 1870s. These books were similar to ‘gothic fiction’ where there was always a secret to discover, but they were more frightening because they were closer to real life. In The Woman in White, realistic characters tell a mysterious story in a real life setting*.

Early Life Collins was born in Marylebone, an area in central London. His father was a well-known landscape painter, William Collins, and his mother was called Harriet Geddes. The family moved to Hampstead, another part of London, in 1826 and his brother, Charles was born there. Their mother taught the two boys at home when they were young. Then in 1835, Wilkie Collins went to school at the Maida Vale Academy. For two years, from 1836 to 1838, he lived in Italy and France with his family and learnt to speak both Italian and French. Then the family returned to England and he went to school in Highbury. While he was there, he discovered that he was good at telling stories and he decided he wanted to continue along this path once he left school in 1840. However, his father found him a job with a company that bought and sold tea. Collins didn’t like this job, but he stayed there for over five years. During this time Collins wrote some stories but they weren’t very successful. Then, in 1846, his father decided to send Wilkie to Lincoln’s Inn to study to be a lawyer. Wilkie Collins wasn’t really interested and didn’t finish his studies until 1851, when he eventually became a lawyer. However, he used this knowledge in many of the books he wrote. 90

setting where a story happens

Wilkie Collins and Charles Dickens In 1851, Wilkie Collins met Charles Dickens for the first time. They became lifetime friends and worked together. Wilkie Collins wrote the story, A Terribly Strange Bed for Dickens’ weekly magazine called Household Words in 1852. He also went on tour with Dickens’ company of actors. Unfortunately, Collins began to suffer from gout, a very painful illness that stayed with him for the rest of his life. When he was feeling better, he travelled around many places in Europe with his friend Dickens. Wilkie Collins’ story The Woman in White first appeared weekly, in Dickens’ magazine All the Year Round and the ordinary people loved it, even if the newspapers didn’t seem so keen on it. Sales (From left) Charles Dickens Jr., Kate Dickens, Charles of the magazine grew as every week, people waited to read Dickens, Miss Hogarth, Mary Dickens, Wilkie Collins what had happened in the story.

The Woman in White Some people say that Collins got his idea for the first meeting between William Hartright and the Woman in White of his book, from something that happened to him in real life. It’s said that Wilkie was walking home in London one night with friends, when a girl dressed in white came running out of a house. His friends did nothing but Wilkie followed this woman to see if he could help her. Many believe that this woman was Caroline Graves and this was how they first met. Caroline was a young woman, in her early twenties with a daughter. By now, Collins was thirty-two. He decided to go and live with Caroline, but didn’t marry her. Apart from a short period when Caroline married a plumber and then left him after a few years, Collins stayed with her and her daughter for the rest of his life. He also had another woman in his life, Martha Rudd and they had three children. When he died, these two women he had shared his life with, each got half of his money.