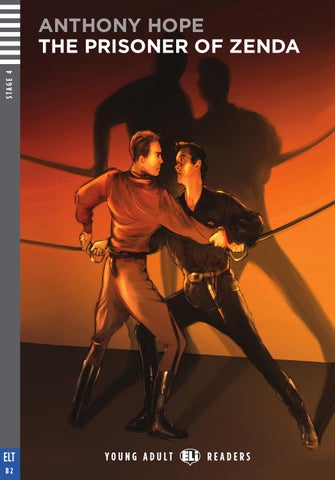 ANTHONY Hope The Prisoner of Zenda

The Prisoner of Zenda

In this reader you will find: – Background information about this novel – A short biography of the author, Anthony Hope – Glossary of difficult words – Comprehension and grammar activities – First Certificate-style activities – Final test

The Prisoner of Zenda

English gentleman, Rudolf Rassendyll, travels to the small European country of Ruritania. When the King of Ruritania disappears, Rudolf must take his place. Will our hero find a way to rescue the King from his evil brother? And will he fall in love with the beautiful Princess Flavia?

I Meet a King

2 ‘Rudolf Rassendyll, when in the world are you going to do something?’

asked my sister-in-law, one day at breakfast. ‘You are twenty-nine years old,’ she continued, ‘and you’ve done nothing with your life but enjoy yourself.’ I put my egg spoon down. ‘My dear Rose,’ I answered, ‘why in the world should I do anything? I have almost enough money to do what I want – no one ever has quite enough money, you know – I come from an important and wealthy family. Your husband, my brother Robert, is Lord Burlesdon. That’s enough for me.’ ‘Good families are generally worse than others,’ she said, annoyed. Then she looked at my hair and said, ‘I’m so glad that Robert’s hair is black!’ At that moment, my brother walked in. ‘What is the matter with you two?’ he asked. ‘She’s complaining about me doing nothing, and having red hair,’ I said, sounding hurt. ‘His hair isn’t his fault,’ admitted Rose. ‘It usually appears once in a generation,’ said my brother, ‘and the nose too, of course.’ ‘Well, I like the red hair and the nose,’ I said, looking proudly at the portrait of my ancestor, Lady Amelia Rassendyll, that was hanging on the wall.

Choose the correct answer. 1 The King cannot go to the coronation because… A B C

2 When Rudolf Rassendyll wakes up, he feels… A B C

■ tired and unhappy. ■ cold and angry. ■ alone and frightened.

3 When Rudolf arrives in Strelsau… A B C

4 When Rudolf gets to the cathedral, he… A B C

■ can’t believe what’s happening to him. ■ feels confident and relaxed. ■ recognises lots of people in the crowd.

5 When ‘King’ Rudolf kisses Princess Flavia, she… A B C

■ goes down on her knees and kisses his feet. ■ announces that he’s the King. ■ is embarrassed, and goes red.

6 When Michael comes to greet the new King, he… A B C

■ is trembling with excitement. ■ is shaking and unhappy. ■ kisses his dear brother with affection.

the events in Chapter 2 in the correct order. The first two have been done to help you.

■ Rudolf kisses Princess Flavia and his brother Michael. 2 The King is poisoned. ■ ■ Rudolf, Sapt and Fritz travel to Strelsau. ■ Rudolf and Flavia travel by horse to the royal palace. ■ Rudolf is crowned King of Ruritania. ■ Rudolf Rassendyll puts the King's clothes on. 1 The King eats a cake sent by Black Michael. ■ ■ Rudolf rides to the cathedral.

Speaking 4 Talk in pairs. What do you think will happen next, answer T or F. Then read the next chapter. Were you right? Did anything surprise you?

T F 1 The King has been killed. 2 Black Michael’s men will capture Rudolf. 3 Sapt and Rudolf will kill Michael. 4 Rudolf will fall in love with Flavia. 5 Antoinette de Mauban will betray Rudolf. 6 Rudolf will be attacked by some of Michael’s men.

The prisoner of Zenda

The prisoner of Zenda