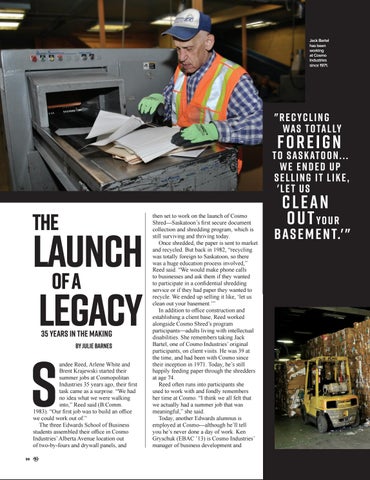 Jack Bartel has been working at Cosmo Industries since 1971.

LAUNCH OF A LEGACY 35 years in the making

andee Reed, Arlene White and Brent Krajewski started their summer jobs at Cosmopolitan Industries 35 years ago, their first task came as a surprise. “We had no idea what we were walking into,” Reed said (B.Comm. 1983). “Our first job was to build an office we could work out of.” The three Edwards School of Business students assembled their office in Cosmo Industries’ Alberta Avenue location out of two-by-fours and drywall panels, and

then set to work on the launch of Cosmo Shred—Saskatoon’s first secure document collection and shredding program, which is still surviving and thriving today. Once shredded, the paper is sent to market and recycled. But back in 1982, “recycling was totally foreign to Saskatoon, so there was a huge education process involved,” Reed said. “We would make phone calls to businesses and ask them if they wanted to participate in a confidential shredding service or if they had paper they wanted to recycle. We ended up selling it like, ‘let us clean out your basement.’” In addition to office construction and establishing a client base, Reed worked alongside Cosmo Shred’s program participants—adults living with intellectual disabilities. She remembers taking Jack Bartel, one of Cosmo Industries’ original participants, on client visits. He was 39 at the time, and had been with Cosmo since their inception in 1971. Today, he’s still happily feeding paper through the shredders at age 74. Reed often runs into participants she used to work with and fondly remembers her time at Cosmo. “I think we all felt that we actually had a summer job that was meaningful,” she said. Today, another Edwards alumnus is employed at Cosmo—although he’ll tell you he’s never done a day of work. Ken Gryschuk (EBAC ’13) is Cosmo Industries’ manager of business development and

CLEAN O U T YOUR 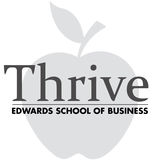