France Jodoin - 'Above and Below' 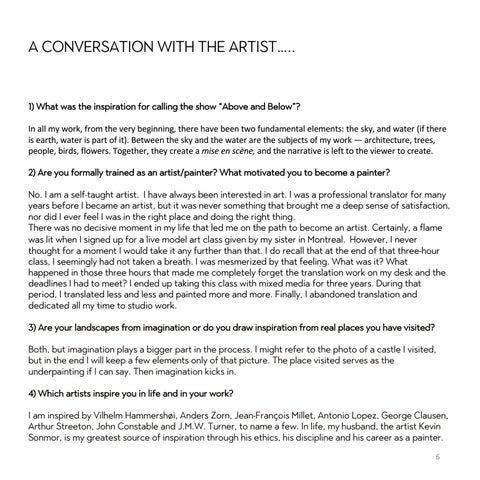 A CONVERSATION WITH THE ARTIST…..

1) What was the inspiration for calling the show “Above and Below”?

In all my work, from the very beginning, there have been two fundamental elements: the sky, and water (if there is earth, water is part of it). Between the sky and the water are the subjects of my work — architecture, trees, people, birds, flowers. Together, they create a mise en scène, and the narrative is left to the viewer to create. 2) Are you formally trained as an artist/painter? What motivated you to become a painter?

No. I am a self-taught artist. I have always been interested in art. I was a professional translator for many years before I became an artist, but it was never something that brought me a deep sense of satisfaction, nor did I ever feel I was in the right place and doing the right thing. There was no decisive moment in my life that led me on the path to become an artist. Certainly, a flame was lit when I signed up for a live model art class given by my sister in Montreal. However, I never thought for a moment I would take it any further than that. I do recall that at the end of that three-hour class, I seemingly had not taken a breath. I was mesmerized by that feeling. What was it? What happened in those three hours that made me completely forget the translation work on my desk and the deadlines I had to meet? I ended up taking this class with mixed media for three years. During that period, I translated less and less and painted more and more. Finally, I abandoned translation and dedicated all my time to studio work. 3) Are your landscapes from imagination or do you draw inspiration from real places you have visited?

Both, but imagination plays a bigger part in the process. I might refer to the photo of a castle I visited, but in the end I will keep a few elements only of that picture. The place visited serves as the underpainting if I can say. Then imagination kicks in. 4) Which artists inspire you in life and in your work?

I am inspired by Vilhelm Hammershøi, Anders Zorn, Jean-François Millet, Antonio Lopez, George Clausen, Arthur Streeton, John Constable and J.M.W. Turner, to name a few. In life, my husband, the artist Kevin Sonmor, is my greatest source of inspiration through his ethics, his discipline and his career as a painter. 6

France Jodoin - 'Above and Below'