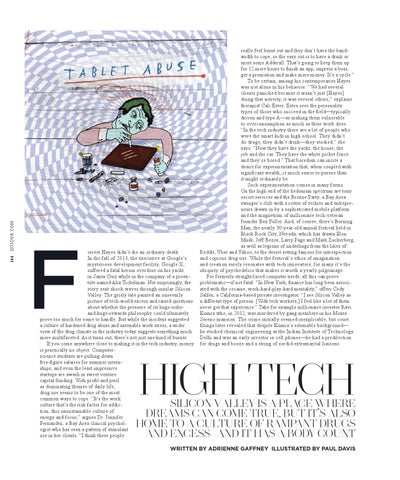 orrest Hayes didn’t die an ordinary death. In the fall of 2013, the executive at Google’s mysterious development facility, Google X, suffered a fatal heroin overdose on his yacht in Santa Cruz while in the company of a prostitute named Alix Tichelman. Not surprisingly, the story sent shock waves through insular Silicon Valley. The grisly tale painted an unseemly picture of tech-world excess and raised questions about whether the pressure of its huge-risksand-huge-rewards philosophy could ultimately prove too much for some to handle. But while the incident suggested a culture of hardened drug abuse and untenable work stress, a wider view of the drug climate in the industry today suggests something much more multifaceted. As it turns out, there’s not just one kind of burner. If you come anywhere close to making it in the tech industry, money is practically no object. Computerscience students are pulling down five-figure salaries for summer internships, and even the least impressive startups are awash in sweet venture capital funding. With profit and peril as dominating themes of daily life, drug use seems to be one of the most common ways to cope. “It’s the work culture that’s the risk factor for addiction, this unsustainable culture of energy and focus,” argues Dr. Jennifer Fernandez, a Bay Area clinical psychologist who has seen a pattern of stimulant use in her clients. “I think these people

really feel burnt out and they don’t have the bandwidth to cope, so the easy out is to have a drink or snort some Adderall. That’s going to keep them up for 12 more hours to finish an app, impress a boss, get a promotion and make more money. It’s a cycle.” To be certain, among his contemporaries Hayes was not alone in his behavior. “We had several clients panicked because it wasn’t just [Hayes] doing that activity, it was several others,” explains therapist Cali Estes. Estes sees the personality types of those who succeed in the field—typically driven and type A—as making them vulnerable to overconsumption as much as their work does. “In the tech industry there are a lot of people who were the smart kids in high school. They didn’t do drugs, they didn’t drink—they studied,” she says. “Now they have the yacht, the house, the job and the car. They have the white picket fence and they’re bored.” That boredom can incite a desire for experimentation that, when coupled with significant wealth, is much easier to pursue than it might ordinarily be. Such experimentation comes in many forms. On the high end of the hedonism spectrum are tony escort services and the Bronze Party, a Bay Area swinger’s club with a roster of techies and entrepreneurs drawn in by a sophisticated mobile platform and the magnetism of millionaire tech-veteran founder Ben Fuller. And, of course, there’s Burning Man, the nearly 30-year-old annual festival held in Black Rock City, Nevada, which has drawn Elon Musk, Jeff Bezos, Larry Page and Mark Zuckerberg, as well as legions of underlings from the likes of Reddit, Uber and Yahoo, to the desert setting famous for introspection and copious drug use. While the festival’s ethos of imagination and creation surely resonates with tech innovators, for many it’s the ubiquity of psychedelics that makes it worth a yearly pilgrimage. For formerly straight-laced computer nerds, all this can prove problematic—if not fatal. “In New York, finance has long been associated with the cocaine, work-hard-play-hard mentality,” offers Cody Salfen, a California-based private investigator. “I see Silicon Valley as a different type of person. [With tech workers,] I feel like a lot of them never got that experience.” Take for example millionaire investor Ravi Kumra who, in 2012, was murdered by gang members in his Monte Sereno mansion. The crime initially seemed inexplicable, but court filings later revealed that despite Kumra’s estimable background— he studied chemical engineering at the Indian Institute of Technology Delhi and was an early investor in cell phones—he had a predilection for drugs and booze and a string of sordid extramarital liaisons.

SILICON VALLEY IS A PLACE WHERE DREAMS CAN COME TRUE, BUT IT’S ALSO HOME TO A CULTURE OF RAMPANT DRUGS AND EXCESS–AND IT HAS A BODY COUNT 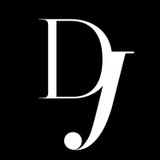 Alicia Vikander talks "The Danish Girl"; stars of the biggest movies of the season share the defining moments of their films; inside Silicon...

Alicia Vikander talks "The Danish Girl"; stars of the biggest movies of the season share the defining moments of their films; inside Silicon...