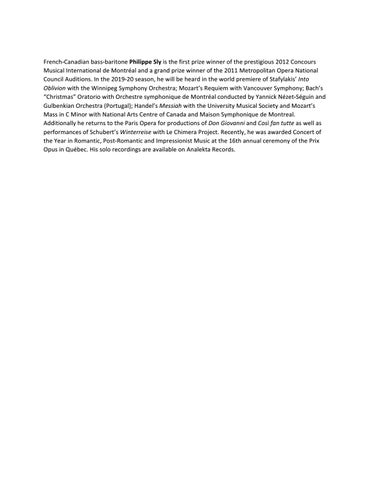 French-Canadian bass-baritone Philippe Sly is the first prize winner of the prestigious 2012 Concours Musical International de Montréal and a grand prize winner of the 2011 Metropolitan Opera National Council Auditions. In the 2019-20 season, he will be heard in the world premiere of Stafylakis’ Into Oblivion with the Winnipeg Symphony Orchestra; Mozart’s Requiem with Vancouver Symphony; Bach’s “Christmas” Oratorio with Orchestre symphonique de Montréal conducted by Yannick Nézet-Séguin and Gulbenkian Orchestra (Portugal); Handel’s Messiah with the University Musical Society and Mozart’s Mass in C Minor with National Arts Centre of Canada and Maison Symphonique de Montreal. Additionally he returns to the Paris Opera for productions of Don Giovanni and Così fan tutte as well as performances of Schubert’s Winterreise with Le Chimera Project. Recently, he was awarded Concert of the Year in Romantic, Post-Romantic and Impressionist Music at the 16th annual ceremony of the Prix Opus in Québec. His solo recordings are available on Analekta Records.