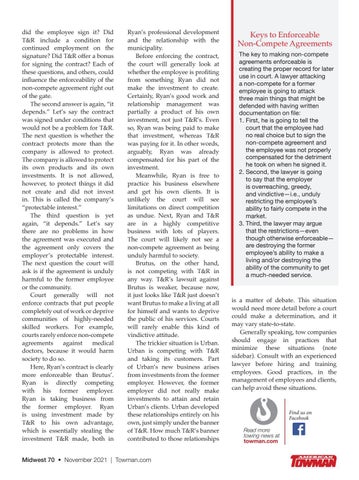 did the employee sign it? Did T&amp;R include a condition for continued employment on the signature? Did T&amp;R offer a bonus for signing the contract? Each of these questions, and others, could influence the enforceability of the non-compete agreement right out of the gate. The second answer is again, “it depends.” Let’s say the contract was signed under conditions that would not be a problem for T&amp;R. The next question is whether the contract protects more than the company is allowed to protect. The company is allowed to protect its own products and its own investments. It is not allowed, however, to protect things it did not create and did not invest in. This is called the company’s “protectable interest.” The third question is yet again, “it depends.” Let’s say there are no problems in how the agreement was executed and the agreement only covers the employer’s protectable interest. The next question the court will ask is if the agreement is unduly harmful to the former employee or the community. Court generally will not enforce contracts that put people completely out of work or deprive communities of highly-needed skilled workers. For example, courts rarely enforce non-compete agreements against medical doctors, because it would harm society to do so. Here, Ryan’s contract is clearly more enforceable than Brutus’. Ryan is directly competing with his former employer. Ryan is taking business from the former employer. Ryan is using investment made by T&amp;R to his own advantage, which is essentially stealing the investment T&amp;R made, both in

Ryan’s professional development and the relationship with the municipality. Before enforcing the contract, the court will generally look at whether the employee is profiting from something Ryan did not make the investment to create. Certainly, Ryan’s good work and relationship management was partially a product of his own investment, not just T&amp;R’s. Even so, Ryan was being paid to make that investment, whereas T&amp;R was paying for it. In other words, arguably, Ryan was already compensated for his part of the investment. Meanwhile, Ryan is free to practice his business elsewhere and get his own clients. It is unlikely the court will see limitations on direct competition as undue. Next, Ryan and T&amp;R are in a highly competitive business with lots of players. The court will likely not see a non-compete agreement as being unduly harmful to society. Brutus, on the other hand, is not competing with T&amp;R in any way. T&amp;R’s lawsuit against Brutus is weaker, because now, it just looks like T&amp;R just doesn’t want Brutus to make a living at all for himself and wants to deprive the public of his services. Courts will rarely enable this kind of vindictive attitude. The trickier situation is Urban. Urban is competing with T&amp;R and taking its customers. Part of Urban’s new business arises from investments from the former employer. However, the former employer did not really make investments to attain and retain Urban’s clients. Urban developed these relationships entirely on his own, just simply under the banner of T&amp;R. How much T&amp;R’s banner contributed to those relationships

The key to making non-compete agreements enforceable is creating the proper record for later use in court. A lawyer attacking a non-compete for a former employee is going to attack three main things that might be defended with having written documentation on file: 1. First, he is going to tell the court that the employee had no real choice but to sign the non-compete agreement and the employee was not properly compensated for the detriment he took on when he signed it. 2. Second, the lawyer is going to say that the employer is overreaching, greedy, and vindictive—i.e., unduly restricting the employee’s ability to fairly compete in the market. 3. Third, the lawyer may argue that the restrictions—even though otherwise enforceable— are destroying the former employee’s ability to make a living and/or destroying the ability of the community to get a much-needed service.

is a matter of debate. This situation would need more detail before a court could make a determination, and it may vary state-to-state. Generally speaking, tow companies should engage in practices that minimize these situations (note sidebar). Consult with an experienced lawyer before hiring and training employees. Good practices, in the management of employees and clients, can help avoid these situations.