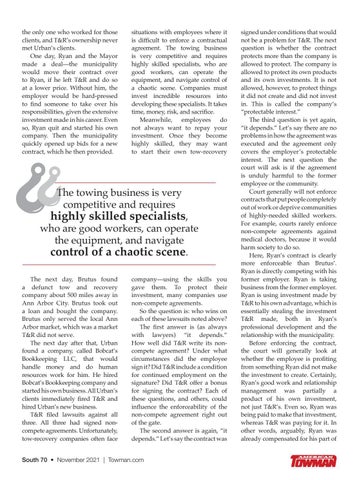 the only one who worked for those clients, and T&amp;R’s ownership never met Urban’s clients. One day, Ryan and the Mayor made a deal—the municipality would move their contract over to Ryan, if he left T&amp;R and do so at a lower price. Without him, the employer would be hard-pressed to find someone to take over his responsibilities, given the extensive investment made in his career. Even so, Ryan quit and started his own company. Then the municipality quickly opened up bids for a new contract, which he then provided.

situations with employees where it is difficult to enforce a contractual agreement. The towing business is very competitive and requires highly skilled specialists, who are good workers, can operate the equipment, and navigate control of a chaotic scene. Companies must invest incredible resources into developing these specialists. It takes time, money, risk, and sacrifice. Meanwhile, employees do not always want to repay your investment. Once they become highly skilled, they may want to start their own tow-recovery

The towing business is very competitive and requires

who are good workers, can operate the equipment, and navigate control of a chaotic scene. The next day, Brutus found a defunct tow and recovery company about 500 miles away in Ann Arbor City. Brutus took out a loan and bought the company. Brutus only served the local Ann Arbor market, which was a market T&amp;R did not serve. The next day after that, Urban found a company, called Bobcat’s Bookkeeping LLC, that would handle money and do human resources work for him. He hired Bobcat’s Bookkeeping company and started his own business. All Urban’s clients immediately fired T&amp;R and hired Urban’s new business. T&amp;R filed lawsuits against all three. All three had signed noncompete agreements. Unfortunately, tow-recovery companies often face

company—using the skills you gave them. To protect their investment, many companies use non-compete agreements. So the question is: who wins on each of these lawsuits noted above? The first answer is (as always with lawyers) “it depends.” How well did T&amp;R write its noncompete agreement? Under what circumstances did the employee sign it? Did T&amp;R include a condition for continued employment on the signature? Did T&amp;R offer a bonus for signing the contract? Each of these questions, and others, could influence the enforceability of the non-compete agreement right out of the gate. The second answer is again, “it depends.” Let’s say the contract was

signed under conditions that would not be a problem for T&amp;R. The next question is whether the contract protects more than the company is allowed to protect. The company is allowed to protect its own products and its own investments. It is not allowed, however, to protect things it did not create and did not invest in. This is called the company’s “protectable interest.” The third question is yet again, “it depends.” Let’s say there are no problems in how the agreement was executed and the agreement only covers the employer’s protectable interest. The next question the court will ask is if the agreement is unduly harmful to the former employee or the community. Court generally will not enforce contracts that put people completely out of work or deprive communities of highly-needed skilled workers. For example, courts rarely enforce non-compete agreements against medical doctors, because it would harm society to do so. Here, Ryan’s contract is clearly more enforceable than Brutus’. Ryan is directly competing with his former employer. Ryan is taking business from the former employer. Ryan is using investment made by T&amp;R to his own advantage, which is essentially stealing the investment T&amp;R made, both in Ryan’s professional development and the relationship with the municipality. Before enforcing the contract, the court will generally look at whether the employee is profiting from something Ryan did not make the investment to create. Certainly, Ryan’s good work and relationship management was partially a product of his own investment, not just T&amp;R’s. Even so, Ryan was being paid to make that investment, whereas T&amp;R was paying for it. In other words, arguably, Ryan was already compensated for his part of