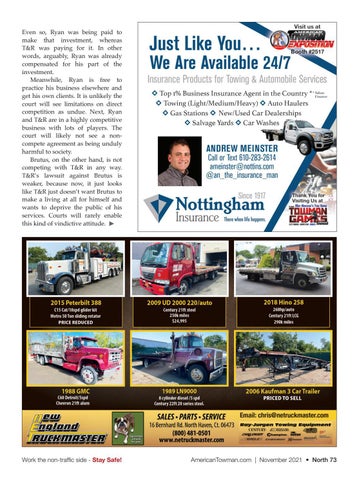 Even so, Ryan was being paid to make that investment, whereas T&amp;R was paying for it. In other words, arguably, Ryan was already compensated for his part of the investment. Meanwhile, Ryan is free to practice his business elsewhere and get his own clients. It is unlikely the court will see limitations on direct competition as undue. Next, Ryan and T&amp;R are in a highly competitive business with lots of players. The court will likely not see a noncompete agreement as being unduly harmful to society. Brutus, on the other hand, is not competing with T&amp;R in any way. T&amp;R’s lawsuit against Brutus is weaker, because now, it just looks like T&amp;R just doesn’t want Brutus to make a living at all for himself and wants to deprive the public of his services. Courts will rarely enable this kind of vindictive attitude.