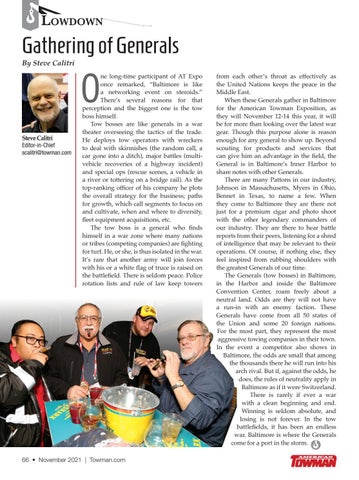 Gathering of Generals By Steve Calitri

ne long-time participant of AT Expo once remarked, “Baltimore is like a networking event on steroids.” There’s several reasons for that perception and the biggest one is the tow boss himself. Tow bosses are like generals in a war theater overseeing the tactics of the trade. He deploys tow operators with wreckers to deal with skirmishes (the random call, a car gone into a ditch), major battles (multivehicle recoveries of a highway incident) and special ops (rescue scenes, a vehicle in a river or tottering on a bridge rail). As the top-ranking officer of his company he plots the overall strategy for the business; paths for growth, which call segments to focus on and cultivate, when and where to diversify, fleet equipment acquisitions, etc. The tow boss is a general who finds himself in a war zone where many nations or tribes (competing companies) are fighting for turf. He, or she, is thus isolated in the war. It’s rare that another army will join forces with his or a white flag of truce is raised on the battlefield. There is seldom peace. Police rotation lists and rule of law keep towers

from each other’s throat as effectively as the United Nations keeps the peace in the Middle East. When these Generals gather in Baltimore for the American Towman Exposition, as they will November 12-14 this year, it will be for more than looking over the latest war gear. Though this purpose alone is reason enough for any general to show up. Beyond scouting for products and services that can give him an advantage in the field, the General is in Baltimore’s Inner Harbor to share notes with other Generals. There are many Pattons in our industry, Johnson in Massachusetts, Myers in Ohio, Bennet in Texas, to name a few. When they come to Baltimore they are there not just for a premium cigar and photo shoot with the other legendary commanders of our industry. They are there to hear battle reports from their peers, listening for a shred of intelligence that may be relevant to their operations. Of course, if nothing else, they feel inspired from rubbing shoulders with the greatest Generals of our time. The Generals (tow bosses) in Baltimore, in the Harbor and inside the Baltimore Convention Center, roam freely about a neutral land. Odds are they will not have a run-in with an enemy faction. These Generals have come from all 50 states of the Union and some 20 foreign nations. For the most part, they represent the most aggressive towing companies in their town. In the event a competitor also shows in Baltimore, the odds are small that among the thousands there he will run into his arch rival. But if, against the odds, he does, the rules of neutrality apply in Baltimore as if it were Switzerland. There is rarely if ever a war with a clean beginning and end. Winning is seldom absolute, and losing is not forever. In the tow battlefields, it has been an endless war. Baltimore is where the Generals come for a port in the storm.