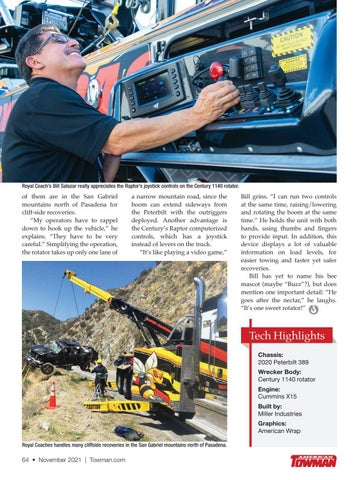 of them are in the San Gabriel mountains north of Pasadena for cliff-side recoveries. “My operators have to rappel down to hook up the vehicle,” he explains. “They have to be very careful.” Simplifying the operation, the rotator takes up only one lane of

a narrow mountain road, since the boom can extend sideways from the Peterbilt with the outriggers deployed. Another advantage is the Century’s Raptor computerized controls, which has a joystick instead of levers on the truck. “It’s like playing a video game,”

Bill grins. “I can run two controls at the same time, raising/lowering and rotating the boom at the same time.” He holds the unit with both hands, using thumbs and fingers to provide input. In addition, this device displays a lot of valuable information on load levels, for easier towing and faster yet safer recoveries. Bill has yet to name his bee mascot (maybe “Buzz”?), but does mention one important detail: “He goes after the nectar,” he laughs. “It’s one sweet rotator!”