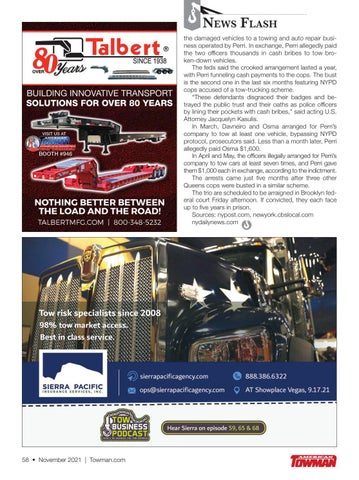 News Flash the damaged vehicles to a towing and auto repair business operated by Perri. In exchange, Perri allegedly paid the two officers thousands in cash bribes to tow broken-down vehicles. The feds said the crooked arrangement lasted a year, with Perri funneling cash payments to the cops. The bust is the second one in the last six months featuring NYPD cops accused of a tow-trucking scheme. “These defendants disgraced their badges and betrayed the public trust and their oaths as police officers by lining their pockets with cash bribes,” said acting U.S. Attorney Jacquelyn Kasulis. In March, Davneiro and Osma arranged for Perri’s company to tow at least one vehicle, bypassing NYPD protocol, prosecutors said. Less than a month later, Perri allegedly paid Osma $1,600. In April and May, the officers illegally arranged for Perri’s company to tow cars at least seven times, and Perri gave them $1,000 each in exchange, according to the indictment. The arrests came just five months after three other Queens cops were busted in a similar scheme. The trio are scheduled to be arraigned in Brooklyn federal court Friday afternoon. If convicted, they each face up to five years in prison. Sources: nypost.com, newyork.cbslocal.com nydailynews.com