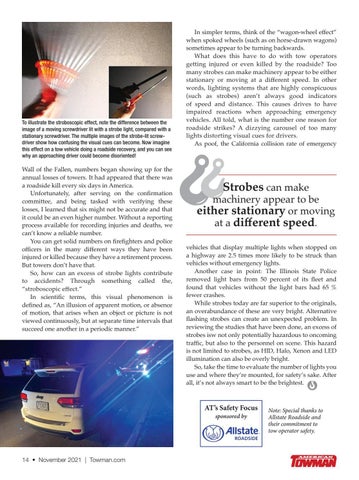 To illustrate the stroboscopic effect, note the difference between the image of a moving screwdriver lit with a strobe light, compared with a stationary screwdriver. The multiple images of the strobe-lit screwdriver show how confusing the visual cues can become. Now imagine this effect on a tow vehicle doing a roadside recovery, and you can see why an approaching driver could become disoriented!

Wall of the Fallen, numbers began showing up for the annual losses of towers. It had appeared that there was a roadside kill every six days in America. Unfortunately, after serving on the confirmation committee, and being tasked with verifying these losses, I learned that six might not be accurate and that it could be an even higher number. Without a reporting process available for recording injuries and deaths, we can’t know a reliable number. You can get solid numbers on firefighters and police officers in the many different ways they have been injured or killed because they have a retirement process. But towers don’t have that. So, how can an excess of strobe lights contribute to accidents? Through something called the, “stroboscopic effect.” In scientific terms, this visual phenomenon is defined as, “An illusion of apparent motion, or absence of motion, that arises when an object or picture is not viewed continuously, but at separate time intervals that succeed one another in a periodic manner.”

In simpler terms, think of the “wagon-wheel effect” when spoked wheels (such as on horse-drawn wagons) sometimes appear to be turning backwards. What does this have to do with tow operators getting injured or even killed by the roadside? Too many strobes can make machinery appear to be either stationary or moving at a different speed. In other words, lighting systems that are highly conspicuous (such as strobes) aren’t always good indicators of speed and distance. This causes drives to have impaired reactions when approaching emergency vehicles. All told, what is the number one reason for roadside strikes? A dizzying carousel of too many lights distorting visual cues for drivers. As poof, the California collision rate of emergency

machinery appear to be either stationary or moving at a different speed. vehicles that display multiple lights when stopped on a highway are 2.5 times more likely to be struck than vehicles without emergency lights. Another case in point: The Illinois State Police removed light bars from 50 percent of its fleet and found that vehicles without the light bars had 65 % fewer crashes. While strobes today are far superior to the originals, an overabundance of these are very bright. Alternative flashing strobes can create an unexpected problem. In reviewing the studies that have been done, an excess of strobes isw not only potentially hazardous to oncoming traffic, but also to the personnel on scene. This hazard is not limited to strobes, as HID, Halo, Xenon and LED illumination can also be overly bright. So, take the time to evaluate the number of lights you use and where they’re mounted, for safety’s sake. After all, it’s not always smart to be the brightest.

Note: Special thanks to Allstate Roadside and their commitment to tow operator safety.