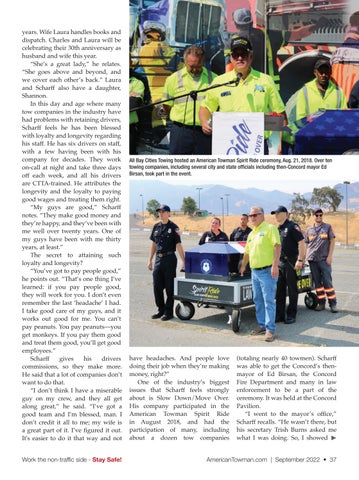 years. Wife Laura handles books and dispatch. Charles and Laura will be celebrating their 30th anniversary as husband and wife this year. “She’s a great lady,” he relates. “She goes above and beyond, and we cover each other’s back.” Laura and Scharff also have a daughter, Shannon. In this day and age where many tow companies in the industry have had problems with retaining drivers, Scharff feels he has been blessed with loyalty and longevity regarding his staff. He has six drivers on staff, with a few having been with his company for decades. They work on-call at night and take three days off each week, and all his drivers are CTTA-trained. He attributes the longevity and the loyalty to paying good wages and treating them right. “My guys are good,” Scharff notes. “They make good money and they’re happy, and they’ve been with me well over twenty years. One of my guys have been with me thirty years, at least.” The secret to attaining such loyalty and longevity? “You’ve got to pay people good,” he points out. “That’s one thing I’ve learned: if you pay people good, they will work for you. I don’t even remember the last ‘headache’ I had. I take good care of my guys, and it works out good for me. You can’t pay peanuts. You pay peanuts—you get monkeys. If you pay them good and treat them good, you’ll get good employees.” Scharff gives his drivers commissions, so they make more. He said that a lot of companies don’t want to do that. “I don’t think I have a miserable guy on my crew, and they all get along great,” he said. “I’ve got a good team and I’m blessed, man. I don’t credit it all to me; my wife is a great part of it. I’ve figured it out. It&#39;s easier to do it that way and not Work the non-traffic side - Stay Safe!

have headaches. And people love doing their job when they’re making money, right?” One of the industry’s biggest issues that Scharff feels strongly about is Slow Down/Move Over. His company participated in the American Towman Spirit Ride in August 2018, and had the participation of many, including about a dozen tow companies

(totaling nearly 40 towmen). Scharff was able to get the Concord’s thenmayor of Ed Birsan, the Concord Fire Department and many in law enforcement to be a part of the ceremony. It was held at the Concord Pavilion. “I went to the mayor’s office,” Scharff recalls. “He wasn’t there, but his secretary Trish Burns asked me what I was doing. So, I showed