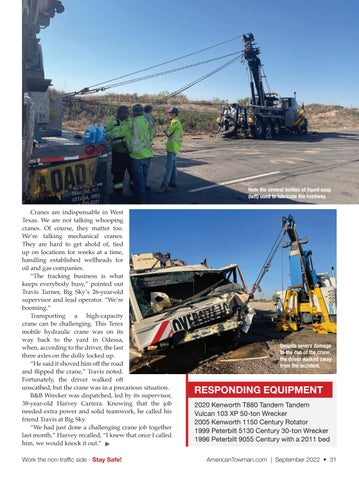 Note the several bottles of liquid soap (left) used to lubricate the roadway.

Cranes are indispensable in West Texas. We are not talking whooping cranes. Of course, they matter too. We’re talking mechanical cranes. They are hard to get ahold of, tied up on locations for weeks at a time, handling established wellheads for oil and gas companies. “The fracking business is what keeps everybody busy,” pointed out Travis Turner, Big Sky’s 26-year-old supervisor and lead operator. “We’re booming.” Transporting a high-capacity crane can be challenging. This Terex mobile hydraulic crane was on its way back to the yard in Odessa, when, according to the driver, the last three axles on the dolly locked up. “He said it shoved him off the road and flipped the crane,” Travis noted. Fortunately, the driver walked off unscathed, but the crane was in a precarious situation. B&amp;B Wrecker was dispatched, led by its supervisor, 38-year-old Harvey Carrera. Knowing that the job needed extra power and solid teamwork, he called his friend Travis at Big Sky. “We had just done a challenging crane job together last month,” Harvey recalled, “I knew that once I called him, we would knock it out.”

Despite severe damage to the cab of the crane, the driver walked away from the accident.