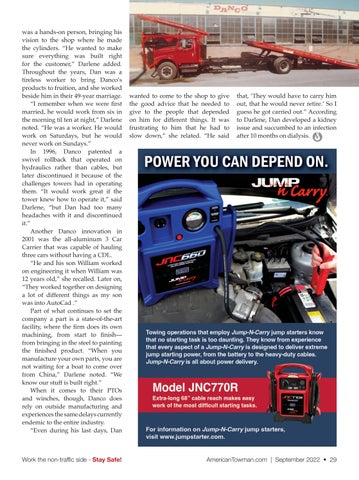 was a hands-on person, bringing his vision to the shop where he made the cylinders. “He wanted to make sure everything was built right for the customer,” Darlene added. Throughout the years, Dan was a tireless worker to bring Danco’s products to fruition, and she worked beside him in their 49-year marriage. “I remember when we were first married, he would work from six in the morning til ten at night,” Darlene noted. “He was a worker. He would work on Saturdays, but he would never work on Sundays.” In 1996, Danco patented a swivel rollback that operated on hydraulics rather than cables, but later discontinued it because of the challenges towers had in operating them. “It would work great if the tower knew how to operate it,” said Darlene, “but Dan had too many headaches with it and discontinued it.” Another Danco innovation in 2001 was the all-aluminum 3 Car Carrier that was capable of hauling three cars without having a CDL. “He and his son William worked on engineering it when William was 12 years old,” she recalled. Later on, “They worked together on designing a lot of different things as my son was into AutoCad .” Part of what continues to set the company a part is a state-of-the-art facility, where the firm does its own machining, from start to finish— from bringing in the steel to painting the finished product. “When you manufacture your own parts, you are not waiting for a boat to come over from China,” Darlene noted. “We know our stuff is built right.” When it comes to their PTOs and winches, though, Danco does rely on outside manufacturing and experiences the same delays currently endemic to the entire industry. “Even during his last days, Dan

wanted to come to the shop to give the good advice that he needed to give to the people that depended on him for different things. It was frustrating to him that he had to slow down,” she related. “He said

that, ‘They would have to carry him out, that he would never retire.’ So I guess he got carried out.” According to Darlene, Dan developed a kidney issue and succumbed to an infection after 10 months on dialysis.