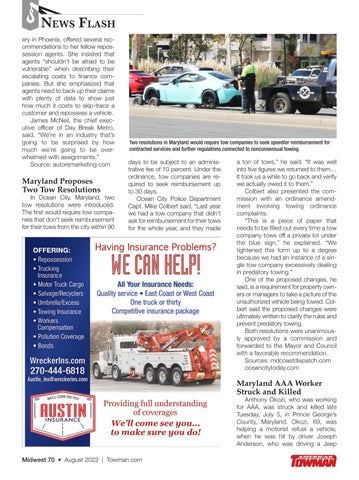 News Flash ery in Phoenix, offered several recommendations to her fellow repossession agents. She insisted that agents “shouldn’t be afraid to be vulnerable” when describing their escalating costs to finance companies. But she emphasized that agents need to back up their claims with plenty of data to show just how much it costs to skip-trace a customer and repossess a vehicle. James McNeil, the chief executive officer of Day Break Metro, said, “We’re in an industry that’s going to be surprised by how much we’re going to be overwhelmed with assignments.” Source: autoremarketing.com

In Ocean City, Maryland, two tow resolutions were introduced. The first would require tow companies that don’t seek reimbursement for their tows from the city within 90

days to be subject to an administrative fee of 10 percent. Under the ordinance, tow companies are required to seek reimbursement up to 30 days. Ocean City Police Department Capt. Mike Colbert said, “Last year we had a tow company that didn’t ask for reimbursement for their tows for the whole year, and they made

a ton of tows,” he said. “It was well into five figures we returned to them… It took us a while to go back and verify we actually owed it to them.” Colbert also presented the commission with an ordinance amendment involving towing ordinance complaints. “This is a piece of paper that needs to be filled out every time a tow company tows off a private lot under the blue sign,” he explained. “We tightened this form up to a degree because we had an instance of a single tow company excessively dealing in predatory towing.” One of the proposed changes, he said, is a requirement for property owners or managers to take a picture of the unauthorized vehicle being towed. Colbert said the proposed changes were ultimately written to clarify the rules and prevent predatory towing. Both resolutions were unanimously approved by a commission and forwarded to the Mayor and Council with a favorable recommendation. Sources: mdcoastdispatch.com oceancitytoday.com

Anthony Okozi, who was working for AAA, was struck and killed late Tuesday, July 5, in Prince George’s County, Maryland. Okozi, 69, was helping a motorist refuel a vehicle, when he was hit by driver Joseph Anderson, who was driving a Jeep Midwest 70 • August 2022 | Towman.com