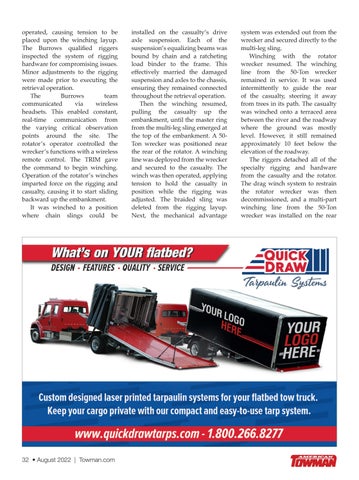 operated, causing tension to be placed upon the winching layup. The Burrows qualified riggers inspected the system of rigging hardware for compromising issues. Minor adjustments to the rigging were made prior to executing the retrieval operation. The Burrows team communicated via wireless headsets. This enabled constant, real-time communication from the varying critical observation points around the site. The rotator’s operator controlled the wrecker’s functions with a wireless remote control. The TRIM gave the command to begin winching. Operation of the rotator’s winches imparted force on the rigging and casualty, causing it to start sliding backward up the embankment. It was winched to a position where chain slings could be

installed on the casualty’s drive axle suspension. Each of the suspension’s equalizing beams was bound by chain and a ratcheting load binder to the frame. This effectively married the damaged suspension and axles to the chassis, ensuring they remained connected throughout the retrieval operation. Then the winching resumed, pulling the casualty up the embankment, until the master ring from the multi-leg sling emerged at the top of the embankment. A 50Ton wrecker was positioned near the rear of the rotator. A winching line was deployed from the wrecker and secured to the casualty. The winch was then operated, applying tension to hold the casualty in position while the rigging was adjusted. The braided sling was deleted from the rigging layup. Next, the mechanical advantage

system was extended out from the wrecker and secured directly to the multi-leg sling. Winching with the rotator wrecker resumed. The winching line from the 50-Ton wrecker remained in service. It was used intermittently to guide the rear of the casualty, steering it away from trees in its path. The casualty was winched onto a terraced area between the river and the roadway where the ground was mostly level. However, it still remained approximately 10 feet below the elevation of the roadway. The riggers detached all of the specialty rigging and hardware from the casualty and the rotator. The drag winch system to restrain the rotator wrecker was then decommissioned, and a multi-part winching line from the 50-Ton wrecker was installed on the rear